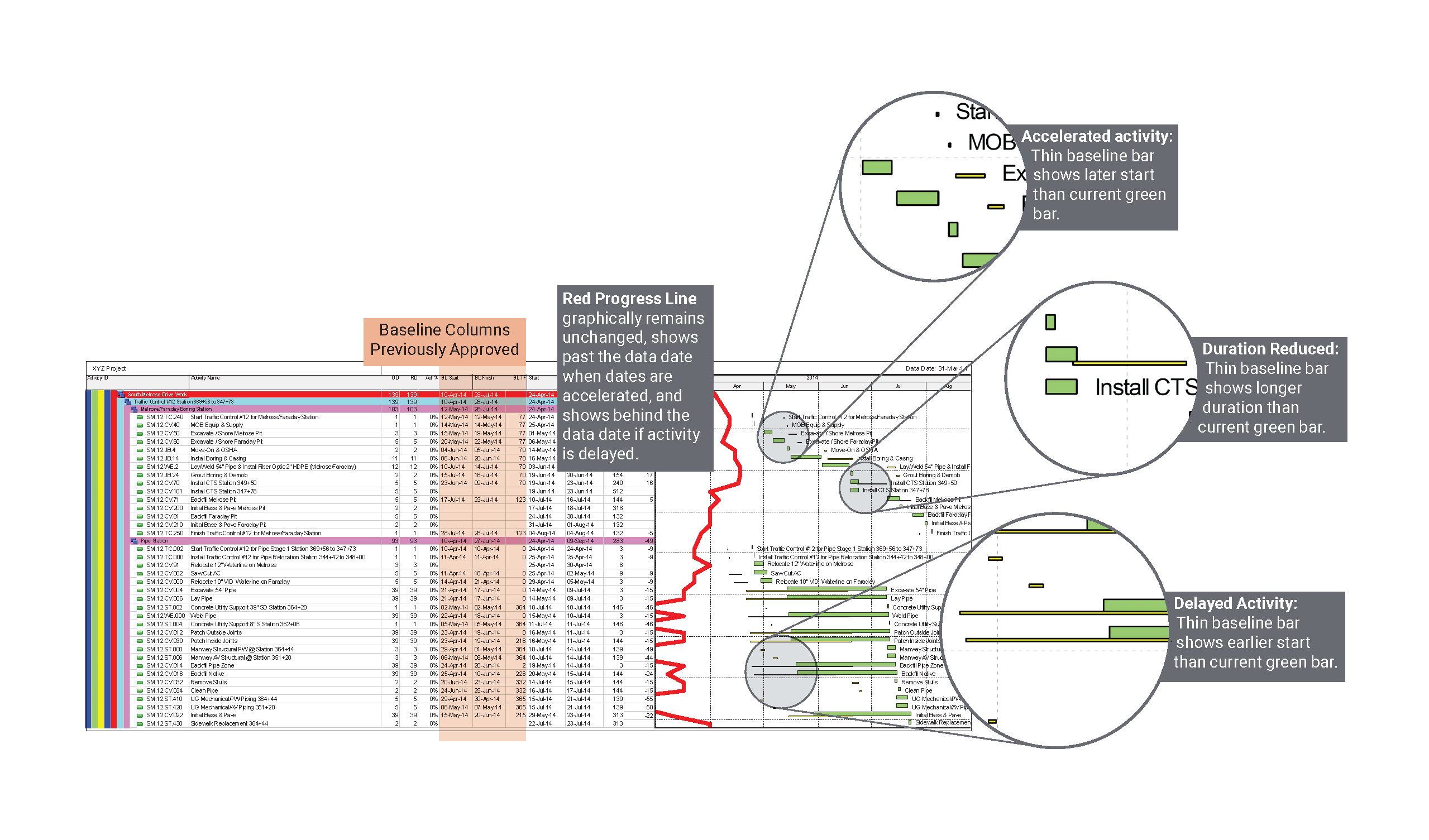 Part 1 of this technical insight (Segments vol. 15) discussed the contractor’s monthly progress report, which is an important tool to help an owner evaluate the status of a job, review and confirm the work that was performed during the reporting month, and address problems, including those that might be delaying the critical path of the project. This second part looks at how an owner can use Primavera P6 tools and Gantt charts¹ to assist with further evaluation of monthly CPM schedule updates. These tools can also help the owner look at the tasks the contractor plans to execute in the near term as well as several months out, evaluate risks to that planned work, and determine how to assist the contractor with these efforts.

An effective tool that Primavera P6 offers is the ability to overlay two schedules for the purposes of comparison. Using this analysis, the owner overlays the new updated schedule on top of last month’s approved schedule. By adding the proper columns in a tabular report, this feature allows the owner to see the variances in durations, start dates (early and late), finish dates (early and late), float, and even costs between the two schedules. Gantt charts can also be developed that overlay each activity’s duration bars and can illustrate whether the activity has shifted in time, been prolonged, or remained on schedule.

Depending on the user’s preferences and what schedule the review will be based on (whether the baseline schedule or the prior month’s update), an owner can also see what activities were added to the new updated schedule and what activities were deleted. Granted, many professionals in the construction scheduling industry are aware of the variety of schedule comparison software programs, such as “schedule analyzer” and “digger,” which generate tabular comparisons between the two schedules. However, the advantage of overlaying two schedules (not in tabular format) is that the overlay can graphically illustrate the changes between the two schedules. With the use of filters, an owner can also isolate the longest path or even the milestones of the project. Having the ability to overlay two schedules and isolate certain portions of the project, say by area or type of work, allows an owner to focus on problem areas. Logic lines (relationships between CPM activities) can be added to depict the workflow and show how the work will be executed.

Difference in Float between Two Schedules.

Another helpful Primavera tool involves analyzing the critical and near-critical float paths. The calculation of various float paths (which can be implemented using various filters, sorts, and scheduling options) becomes helpful in determining future critical and near-critical work. This allows owners to anticipate problems that may impact future work. Contractors tend to focus on the work that’s occurring in the upcoming month, but they may overlook the work that’s expected to be completed in five or six months. This float path analysis sorts work activities by their corresponding float and organizes the activities in that particular float path relative to the critical path of the job. Such an analysis permits an owner to identify risks that may cause a delay to the project but may not arise for months, such as important submittals or permits, the release of fabrication of important equipment or material, the schedule of contract notices to inspectors or third parties, and any work moratoriums that may prevent work from being performed. One can combine the schedule overlay option discussed above with this float path sort and see the difference in float between two schedules.

Certain Primavera tools and Gantt charts can be used to produce reports and graphics that can help both owner and contractor to evaluate the status of the project. Further, they can assist with the evaluation of upcoming work and provide an opportunity to mitigate risks and delays to that work, which will help both parties complete the project on time.

¹Type of bar chart that illustrates a project schedule, named after its popularizer, Henry Gantt. ■