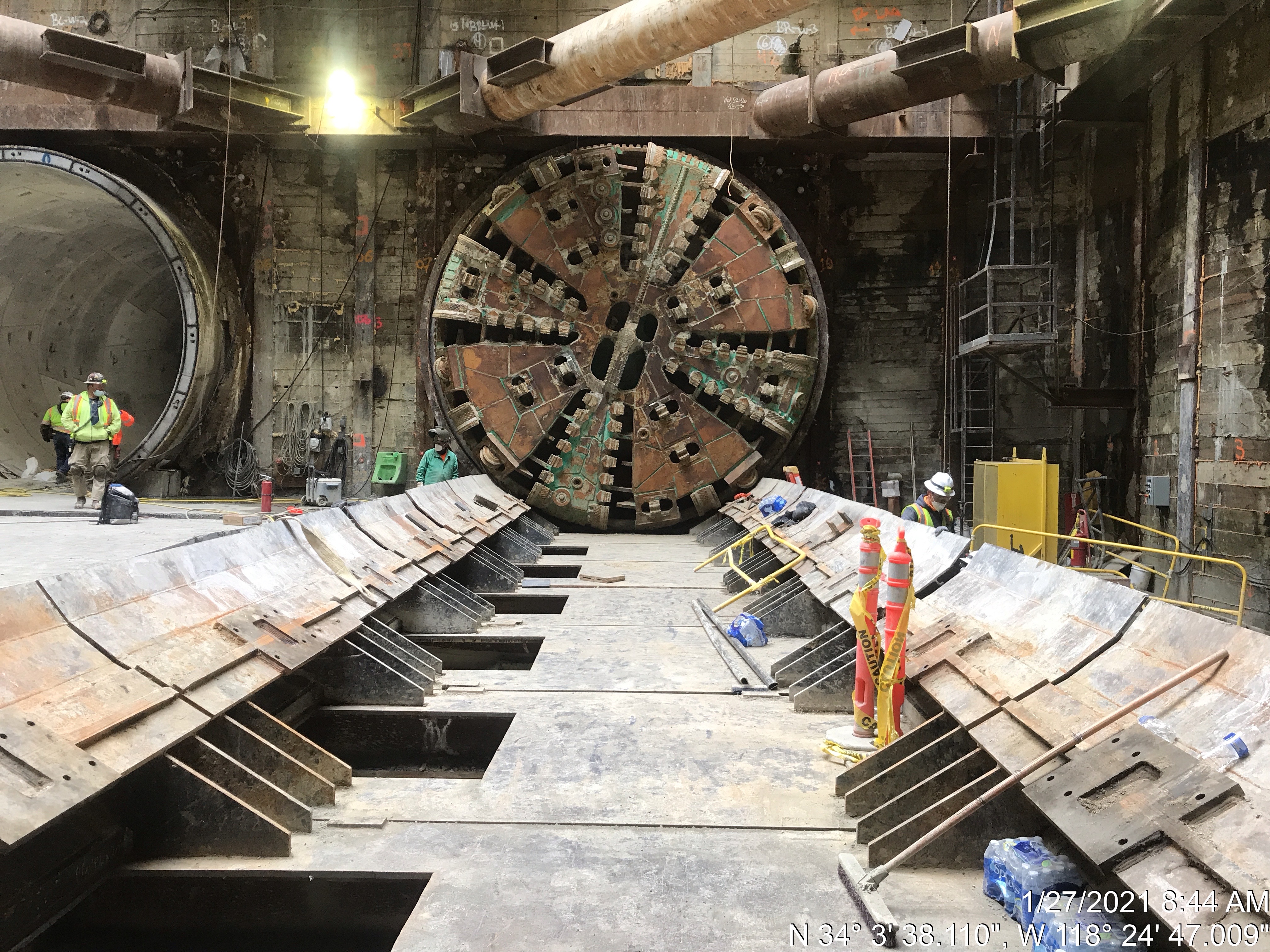 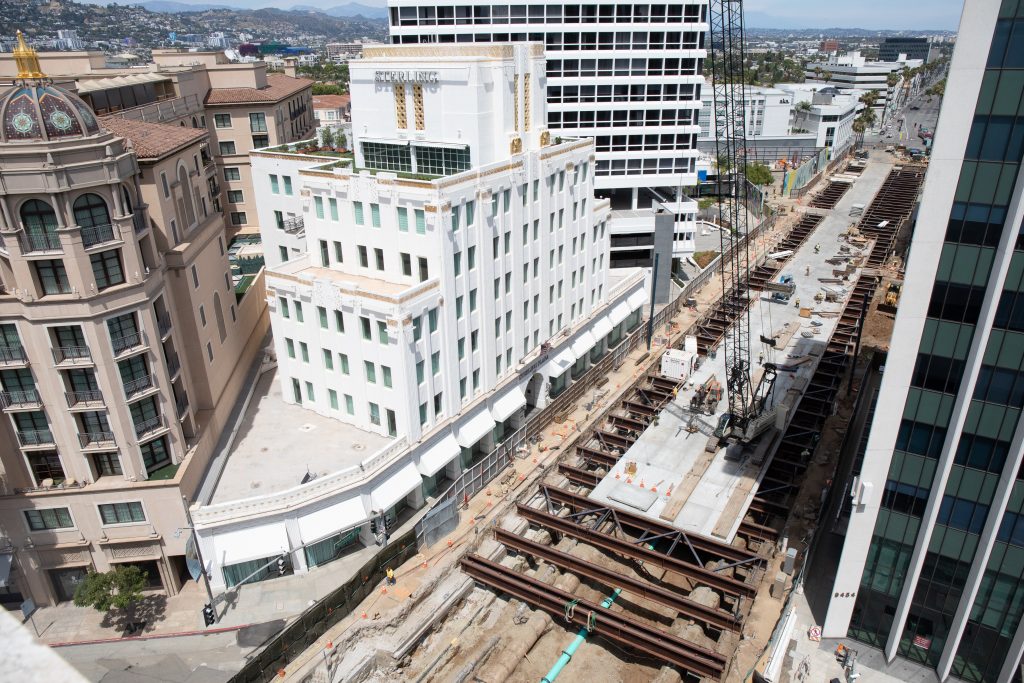 The design-build contract was awarded to a joint venture between Tutor Perini and O&G Industries (TPOG) in 2017, with construction scheduled to be completed by 2025. The contract provides for final design and construction of the infrastructure along the 2.59-mile alignment. The Purple Line 2 CM Partners Joint Venture led by AECOM, SafeworkCM, Morgner and TEC, with McMillen Jacobs Associates as the lead tunneling and geotechnical consultant, is providing construction management support services to Metro on WPLE Section 2.

The Wilshire/Rodeo Station (WRS) and the Century City Constellation Station (CCCS) are within the jurisdiction of the City of Beverly Hills and City of Los Angeles, respectively. Both station boxes are being constructed using the cut-and-cover method. The 20.8-foot (6.3 m) outside-diameter tunnels (known as the BL Tunnel and the BR Tunnel) are being excavated by two earth-pressure balance tunnel boring machines (TBMs) eastward from the CCCS box to the future Section 1 terminus. There are two tunnel reaches: Reach 5 between the two new stations, and Reach 4 between the WRS and the Section 1 terminus. Multiple cross passages are being constructed within the alignment. In addition, there are two seismic fault zones along Reach 5 (Lasky Crossing Fault Zone and Wilshire Crossing Fault Zone) for which special seismic segments are being fabricated and installed.

Construction of both station boxes started in 2020 during the COVID-19 pandemic. WRS box piling and decking activities started in February 2020 and were completed in June 2020. Excavation of the TBM launch box (eastern portion of the CCCS box) was completed on November 1, 2019. Piling and decking of the remainder of the CCCS box west of the TBM launch box began in June 2020 and completed in April 2021. 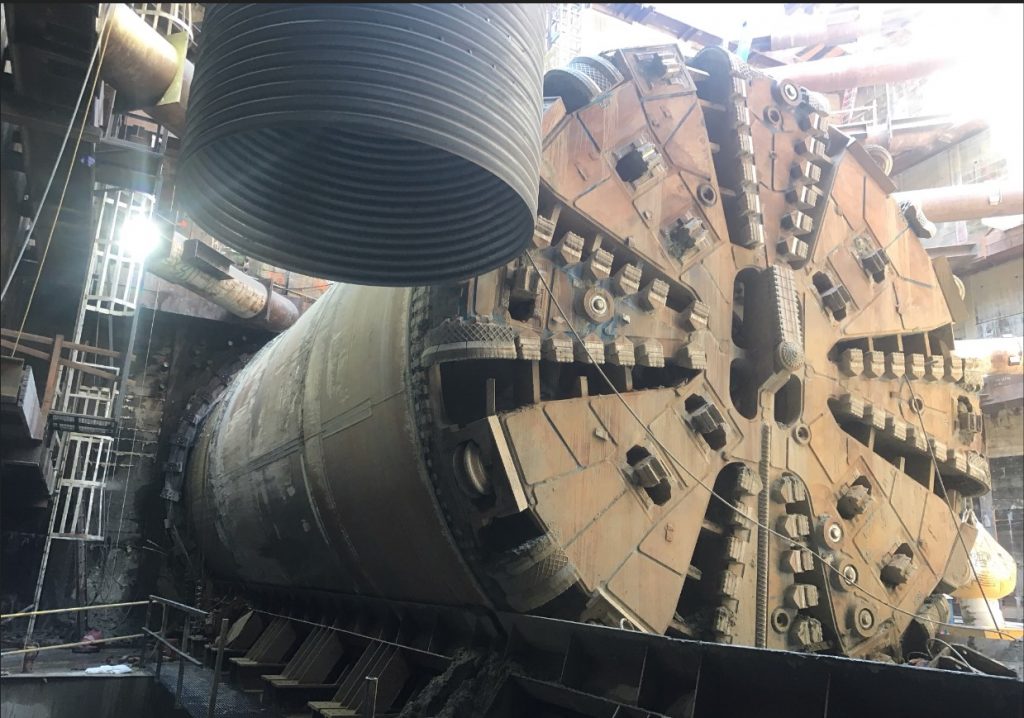 The BL and BR TBMs were launched in April 2020 and July 2020, respectively, and broke through the Tunnel Access Shaft (approximately 320 feet [96 m] from the launch box) on September 16, 2020 (BL TBM) and October 9, 2020 (BR TBM). As part of the contract, the contractor performed horizontal directional drilling from the Tunnel Access Shaft east wall and drilled holes, approximately 800-feet [244 m] long, in three different locations above the tunnel crowns. A magnetometer test performed on all drilled holes detected anomalies, possibly oil well steel casings. Mitigation of these anomalies was completed prior to tunneling.