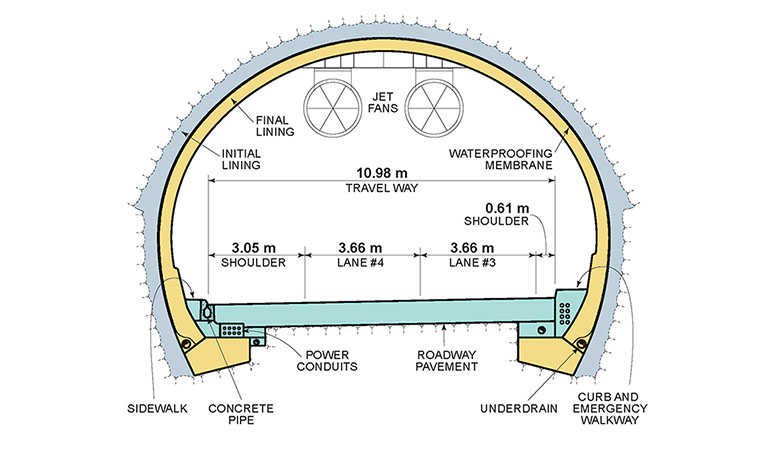 Most transportation tunnels constructed using the New Austrian Tunnelling Method (NATM), also known as Sequential Excavation Method, have a two-pass lining system: the initial lining and secondary (or final) lining. Depending on ground and hydrogeologic conditions, a waterproofing membrane is often installed between the linings to ensure a watertight tunnel.

The initial lining—often consisting of fiber reinforced or plain shotcrete—and any rock reinforcement (e.g., rock dowels) are typically designed to carry ground loads, control ground deformations during tunnel construction, and provide a safe work environment. The secondary lining—consisting of either shotcrete or cast-in-place (CIP) reinforced concrete—is designed to support long-term ground loads, affixed mechanical and electrical equipment, hydrostatic pressures, and seismic loads where applicable. With this design approach, the installed initial lining is often not considered a component of the long-term load-carrying lining system. However, a well-designed initial shotcrete lining constructed using state-of-practice methods is capable of supporting a significant portion of the long-term ground loads during a tunnel’s design service life. Neglecting this capacity can result in an overly conservative secondary lining design. To achieve a cost-effective design, the concept of load sharing between initial and secondary linings is gaining increased acceptance by NATM tunnel designers. Quality and durability of the initial lining is critical for reliance on long-term load sharing.

Double shell lining (DSL) is one of the two-pass lining systems most widely used in NATM tunnels. It typically consists of an initial shotcrete lining, a sheet waterproofing membrane, and a secondary shotcrete or CIP concrete lining. With a DSL system, shear resistance does not develop along the membrane interface, so relative displacements (slip) may occur between initial and secondary linings, and transfer of load from initial lining to the secondary lining is limited. However, experience with DSL design shows that, even accounting for significant initial shotcrete lining deterioration, the ground load transferred to the secondary lining ranges from 35 to 70% of that originally carried by the initial lining. This results in a analogous reduction of ground loads that otherwise will be carried by the secondary lining. The use of load sharing in the design of a tunnel’s secondary lining can lead to an efficient design solution and result in significant cost savings.

Yiming is based in the Walnut Creek office and Mike works as a consultant to McMillen Jacobs. They have worked on New Austrian Tunnelling Method (NATM) design of several notable projects, such as the Caldecott Improvement Project and various stages of the WestConnex Project.