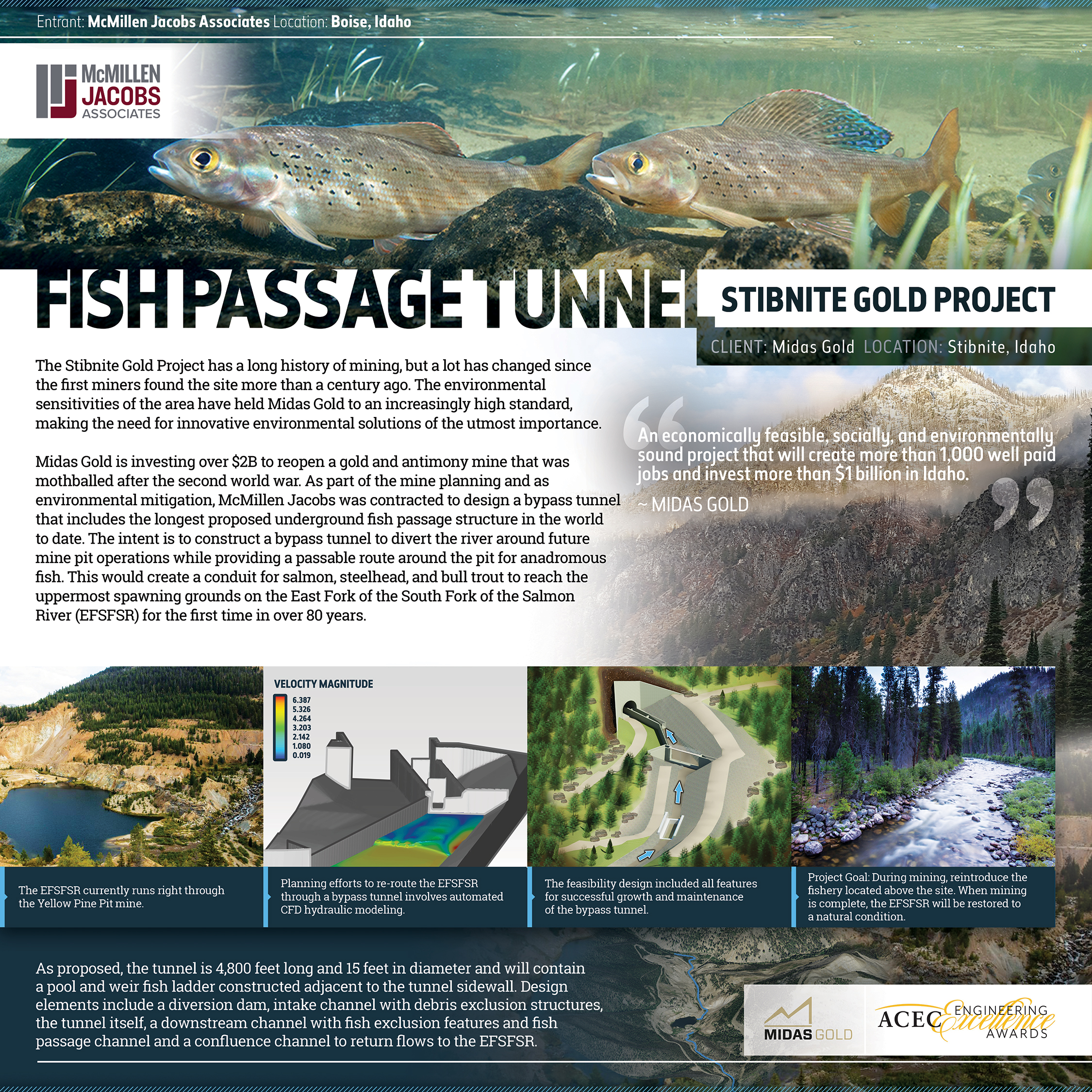 For the second year in a row, McMillen Jacobs Water Resources Division was a top winner in the 2020 American Council of Engineering Companies (ACEC) of Idaho’s annual Engineering Excellence Awards program. McMillen Jacobs took 1st Place in the Studies, Research, and Consulting category for the Stibnite Gold, Fish Passage Tunnel Project that we completed for Midas Gold.  The project also received a National Recognition Award from the 2020 ACEC National Engineering Excellence Awards Program.

Sponsored by ACEC’s Idaho State Chapter, the awards program recognizes projects that represent a wide range of engineering achievements and demonstrate the highest degree of skill and ingenuity.

For almost 82 years, the East Fork of the South Fork of the Salmon River (EFSFSR) has not provided a passable route for anadromous fish, preventing access to historical spawning and rearing habitat. Blocking the way of viable fish passage is the historic Yellow Pine pit—which provided important precious metals during World War II but was later abandoned. In an effort to promote environmental stewardship and establish a legacy of environmentally and socially responsible mining operations, Midas Gold has included river restoration planning activities in the conceptual design of the mining operations plan. A restored river channel would provide access to the upper reaches of the watershed for spawning and rearing fish. McMillen Jacobs Associates conducted a study and designed a tunnel that would re-route the entirety of the EFSFSR, at the same time providing fish passage around the mining operation. The tunnel itself would include a fish ladder, providing a safe and efficient route for salmon, steelhead, and Bull Trout to reach the uppermost spawning grounds of the EFSFSR.

ACEC Idaho judges highlighted the social, economic, and sustainable benefits of restoring the fish passage and the uniqueness of the EFSFSR flowing through a tunnel, as contributing factors that lead to a first-place win.

Due to COVID-19, the Idaho and National ACEC Award ceremonies have been postponed for a later date.