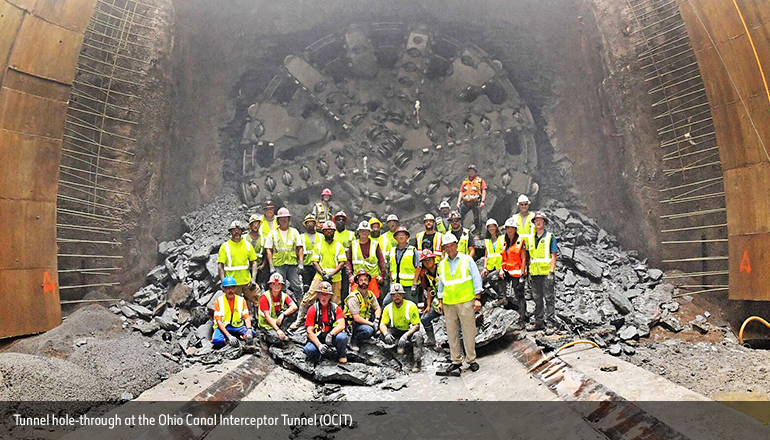 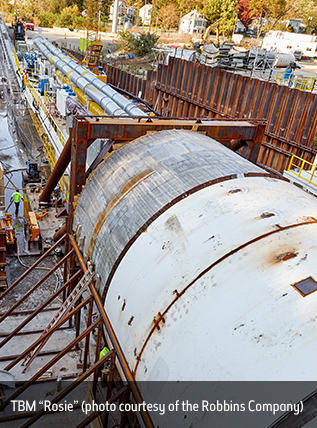 McMillen Jacobs Associates provided tunnel design services to the owner, the City of Akron, and engineering services during construction including full-time on-site representation. The OCIT project diverts CSOs from overloaded interceptors and racks throughout Akron into the 26.6 million-gallon-capacity (100.7 ML) storage tunnel via several diversion structures, five drop shafts, and four tunneled connecting sewers. The project was awarded for $184 million to Kenny-Obayashi, a joint venture, and construction began on November 1, 2015.

The TBM launched in a full face of soil from a portal on Akron’s north side and has progressed through variable ground conditions, which include silty sands, mixed face transitional ground, and a full face of shale bedrock with varying cover as low as 10 feet (3 m) in some locations. A 30.2-foot-diameter (9.2 m) Robbins XRE Crossover machine was chosen for the tunnel excavation. In the soft ground and mixed face parts of the drive, recorded settlements were less than 0.5 inch (13 mm), and tunneling was completed beneath two city streets and two railroads with minimal impact to the public.