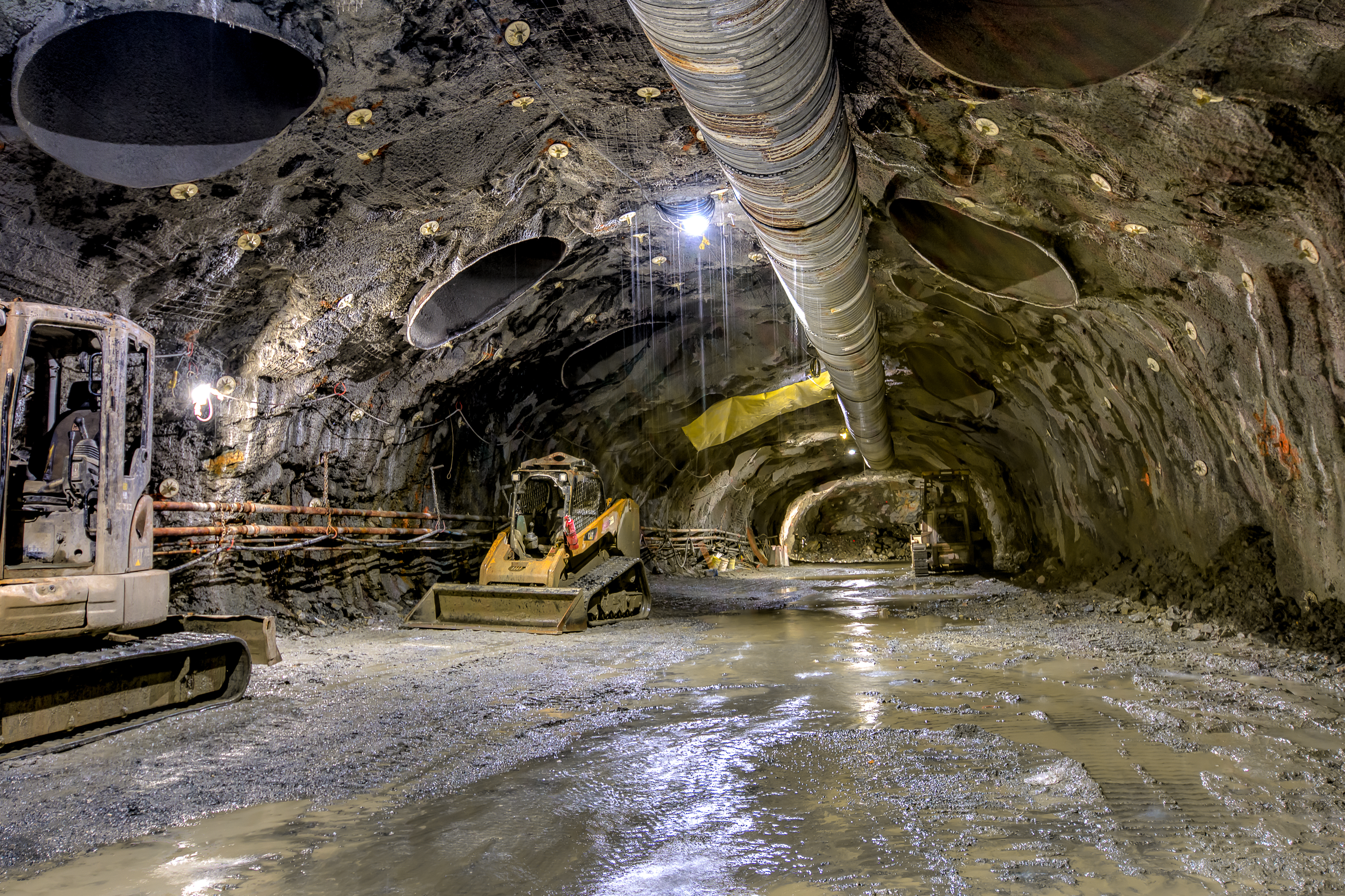 Top heading of the Forebay Chamber with initial support installed and blind bored well shafts in the crown. (photo courtesy of Barnard Construction)

In 2015, Barnard of Nevada, Inc. (subsidiary of Barnard Construction Company, Inc.) was awarded the Construction Manager at Risk contract by the Southern Nevada Water Authority (SNWA) to provide constructability, value engineering, scheduling and estimating for the $650-million Lake Mead Intake No. 3 Low Level Pump Station (L3PS). McMillen Jacobs Associates was retained by Barnard to perform preconstruction design services, served as the Engineer of Record for the drill-and-blast excavation initial support, and provided design support during construction of the L3PS underground works. SNWA draws drinking water primarily from Lake Mead near Saddle Island from the existing Intake Nos. 1 and 2 pumping stations. This is approximately 5 miles (8 km) northwest of the Hoover Dam and approximately 20 miles (32 km) east of the center of Las Vegas. 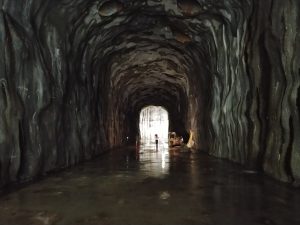 SNWA was concerned that the declining lake levels, due to severe drought conditions in the Colorado River Basin, could potentially impact water quality or leave the existing intake facilities inoperable. In order to continue providing quality water and delivery to SNWA’s 2.2 million customers, the construction of a low-level lake tap tunnel was undertaken in 2008 and completed in 2015. The L3PS project was designed to convey water from the lake tap tunnel to the surface and into both of SNWA’s water treatment plants. The project involved excavation of a 26-foot-diameter (8 m), 527-foot-deep (161 m) access shaft that connects to a 377-foot-long, 33 foot-wide, 36-foot-high (115 x 10 x 11 m) Forebay Chamber, which will receive an array of 34 large-diameter well shafts, transition shafts, and adits to connect the Forebay to the recently completed Lake Tap Tunnel.

McMillen Jacobs met the accelerated schedule requirements by working closely with Barnard and SNWA to communicate design findings as they became available. This allowed Barnard to prepare and refine a not-to-exceed construction budget in parallel with our design effort. McMillen Jacobs provided an initial feasibility report for temporary excavation support as well as a final initial support design report, and design for temporary construction facilities. We also provided consultation to the contractor on selection of blind bore versus raise bore methodlogy for the deep, large-diameter well shafts. Once the contractor made the selection, these shafts were incorporated into the excavation sequence and design of the Forebay’s initial support design and final lining. The ground conditions at the L3PS site include highly variable blocky hard rock with a series of highly fractured, high-angle faults/shear zones that intersected the excavation. Excavation and support methods consisted of sequential drill-and-blast with rock bolts, localized shotcrete with wire mesh, and rebar spiling through the faulted/sheared ground. In the highly sheared zones, a 3D FLAC analysis was used to predict ground behavior and also determine the most efficient sequential excavation of the large openings.

The underground construction of the L3PS was completed in December 2018. Barnard has installed all 34 of the one-off pumps (which hold the world’s record for highest head and flow combined) and is nearing completion of the testing and commissioning phase. SNWA will take over the pump station in early 2020 with the goal of bringing the system fully online by the spring. The project is projected to come in under budget and ahead of schedule.