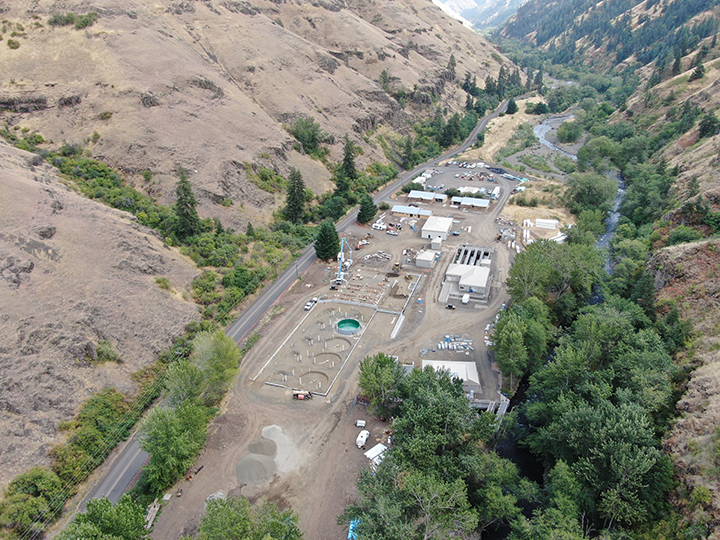 We received final approval of the design and began moving forward with the construction of the Walla Walla Spring Chinook Hatchery facility and existing facility upgrades in early 2020.

McMillen Jacobs crews commenced mass excavation for the footprint of the new hatchery location, with plans to begin erecting pre-engineered steel structures in July of 2020, finish drying in all structures before the fall rain arrives in October of 2020 and complete the mechanical components and startup in commissioning before the Spring spawning season in 2021.

Then an unexpected 100-year flood event—with some sources estimating it as a 500-year flood event—and a global pandemic, and one would think any involved stakeholders would be forced to revisit those timeline goals. However, because of McMillen Jacobs’ emergency preparedness, expertise with the design-build model and modifications, and proactive health protocols on the job site, the Spring 2021 timeline is full-speed-ahead.

According to Walla Walla Union-Bulletin reporting, the February 2020 flood was one of the worst three floods in the valley’s history, and maybe the worst when considering water volume. The U.S. Army Corps of Engineers measured peak waters at about 7,000 cfs in some areas, leading to breached levees, mass evacuation, and destroyed homes. It was an unprecedented event that hadn’t been seen since 1931 and 1996, per the Union-Bulletin, and led to a deluge of water flooding Eastern Oregon and Southeastern Washington.

At the hatchery, the flood changed the course of the river at the upstream and downstream end of the project. That reduced the property footprint significantly and destroyed the juvenile fish bypass outfall and pollution abatement pond outfall. And, as perhaps the greatest challenge to the project, the flood also undercut the riverbed at the intake, dropping the water surface elevation (WSEL) there.

Most of the existing hatchery facilities, however, were largely protected by the time the flood began. McMillen Jacobs crews were performing the mass excavation at the time, and just before the rains and flood hit, they had imported structural fill material and compacted the rock at the base of the excavation in preparation for the structural fill operation, which helped protect the bottom of the excavation. The flood sparked significant design changes and scope additions, but with the design-build model, McMillen Jacobs was able to quickly turn around solutions to the clients, begin redesign efforts, and deliver emergency stabilization work. McMillen Jacobs implemented emergency bank repair to prevent the river bank from eroding further into the property; quickly moved to redesign the pump back station and associated pollution abatement pond outfall, which are now currently under construction; and is currently working on possible design modifications to accommodate the lower WSEL at the intake.

Soon after beginning the dirt work operation post-flood in March, BPA instituted a 2-week stop work order as a safety precaution in response to COVID-19. While this set operations back a couple of weeks and affected the supply chain of permanent materials from suppliers and subcontractors, as well as staffing of warehouses and shops, McMillen Jacobs construction staff diligently continued planning efforts, design, and procurement in anticipation of project restart. McMillen Jacobs utilized this time to implement health protocols onsite, including distributing and wearing facemasks when working within 6 feet of another employee, gallons of hand sanitizer onsite, an expanded break area for employees, frequent disinfection of office workspace and equipment, and checking everyone’s temperature during morning stretch and flex.

The project team has taken to the protocols in stride and has now completed the hatchery foundation and shop concrete pours. If schedule alterations hold, they plan to begin erecting the pre-engineered steel structures in late July and are on track to complete the project by 2021’s Spring spawning season.