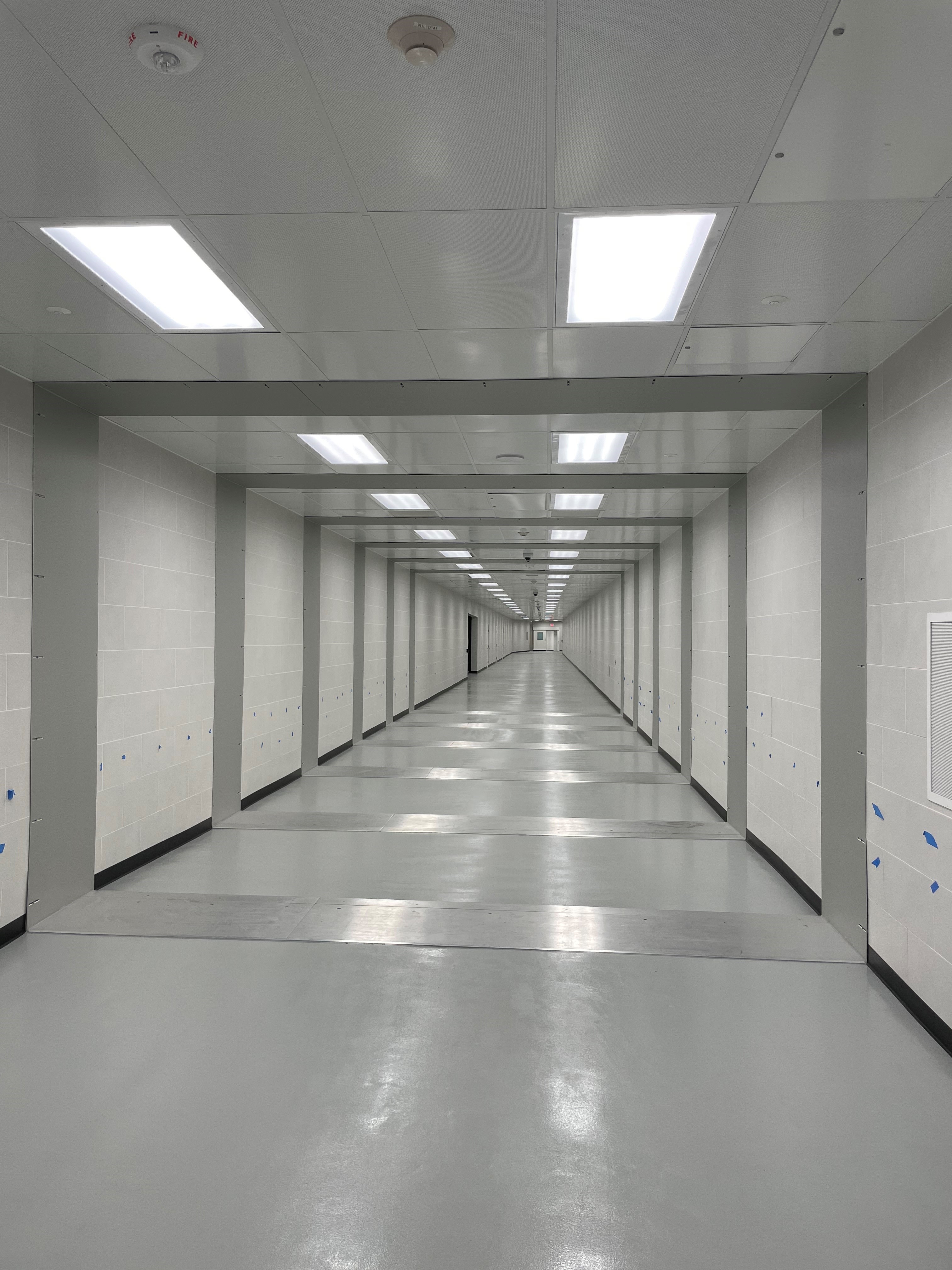 In July 2022, the Courthouse Commons Tunnel Project celebrated the first in-service use of its pedestrian tunnel. This design-build project is located in downtown San Diego, California, and comprises the construction of a tunnel and other associated improvements connecting San Diego County’s Central Jail with the state-owned New Courthouse. The Tunnel facilitates safe, secure transfer of inmates between the two. In addition, a new Inmate Transfer Facilities Shaft was constructed adjacent to the County Jail as part of the connection between the Tunnel and the County Jail.

The horseshoe-shaped, approximately 328-foot-long-Tunnel (100 m) has a finished width of 15 feet (4.6 m) and a suspended ceiling height of 10 feet (3 m) with a 6-foot plenum above (1.8 m). It passes below existing basement foundations for the Old Courthouse and Old Jail buildings in the block bounded by Front and Union Streets. The approximately 58-foot-deep (17.7 m) Inmate Transfer Facilities Shaft has finished dimensions of 15 feet by 52 feet (4.6 x 15.8 m) and provides passage below the Tunnel and Central Jail B1 level using a stairwell and two elevators. 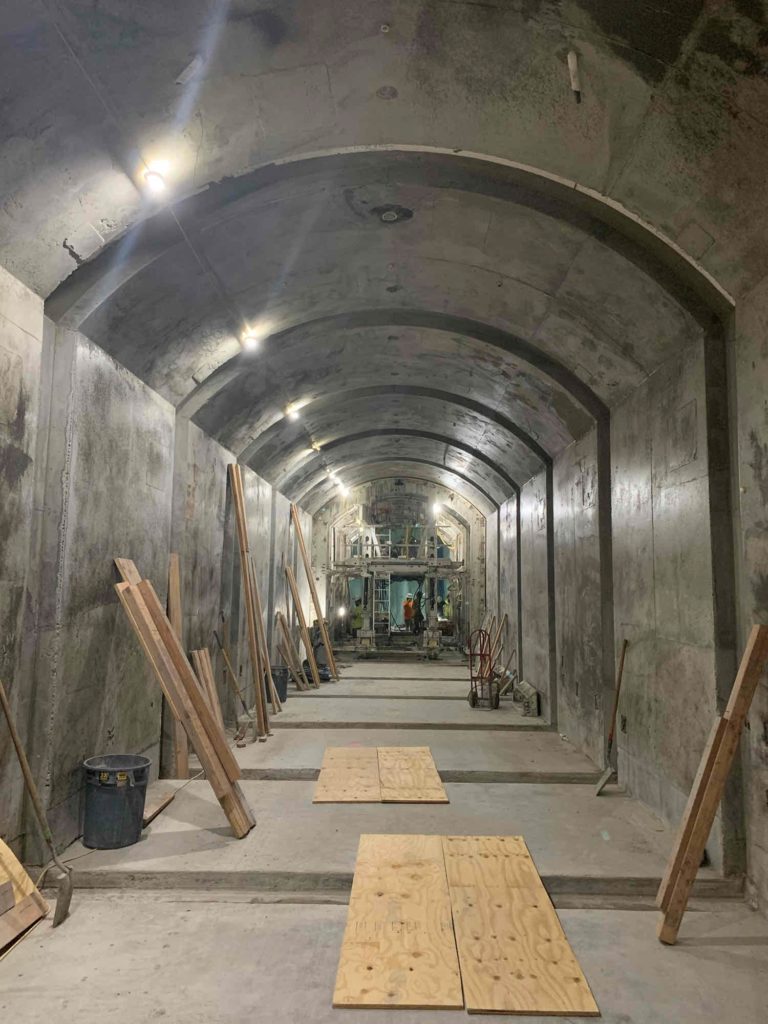 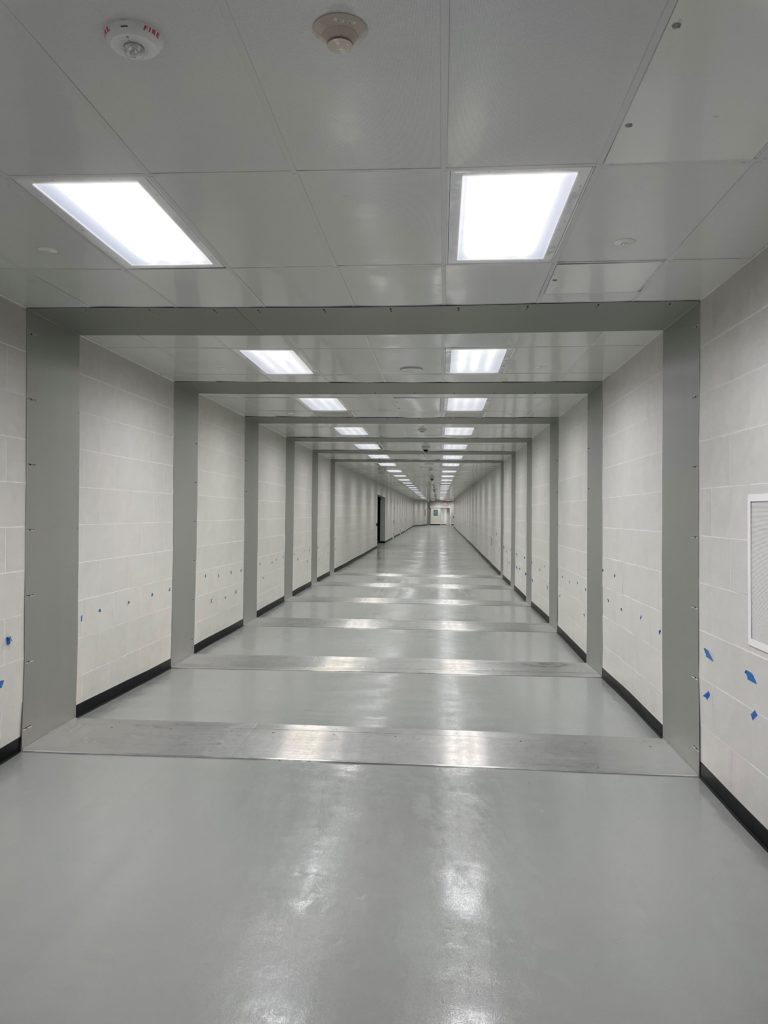 The Tunnel was excavated using the Sequential Excavation Method (SEM) in challenging conditions consisting of cohesionless soils ranging from coarse, poorly graded sand to fine, well-graded sand with silt, silty sand, and clayey sand. The natural groundwater table before dewatering was approximately at the springline elevation of the tunnel but was maintained 3 feet (0.9 m) below the invert level of the excavated tunnel during construction.

Initial support consisted of canopy pipes for presupport, lattice girders and 10-inch-thick (255 mm) shotcrete with a closed temporary invert in the top heading, a temporary face wedge, and face dowels as required for more than half the tunnel alignment. Pipe spiles instead of canopy pipes were utilized as presupport for the final 140 feet (43 m). The cast-in-place concrete final lining is fully tanked with a waterproofing membrane installed between initial shotcrete lining and final lining.

To address fault offset, a 50-foot-long (15 m) seismic section was incorporated into the final lining within the active San Diego Fault Zone in the eastern reach of the tunnel under Front Street. The Tunnel crosses the active fault with a width varying from approximately 5 feet (1.5 m) on the south to approximately 7 feet (2.1 m) on the north. The fault is expected to exhibit up to 18 inches (455 mm) of displacement, which is expected to be distributed within the fault zone, during a design earthquake event with a 2,475-year return period. The seismic section consists of an enlarged cross-section formed by a series of structural segments (rings) with joints designed to allow slippage and deformation. This accommodates asymmetric ground loads while allowing lateral, vertical, and longitudinal components of the distributed fault offset to take place at the joints.