The Washington State Coliseum was built in the 1960s for the Seattle World’s Fair. In 2019, construction began on a major ($1B) redevelopment to expand the arena. The redeveloped building— Climate Pledge Arena —retains the historic roof but continues 30 feet (9 m) below the original arena floor to expand capacity. A new truck delivery tunnel will reduce pedestrian/vehicle conflicts. Trucks will drive from street level into a parcel approximately 400 feet (122 m) south of the arena’s main parcel, go down a ramp contained within a depressed cut, into an approximately 180-foot-long (55 m) tunnel that leads to a loading dock in the arena’s deepest basement level. The project was designed by a team led by architect Populous, and construction was awarded to Mortenson in a Construction Management at Risk contract.

McMillen Jacobs designed excavation and temporary support of the tunnel as well as the associated depressed cut decline.

The accelerated design schedule was driven by building permit considerations. Design kickoff occurred in February 2019, permits were issued in July 2019, and construction began in August 2019.

Support of excavation (SOE) for the depressed cut decline consisted of soldier pile and lagging walls with tiebacks. The cut height varied from 5 to 35 feet (1.5–10.7 m) and included a bumped-out “dogbone” area near the tunnel headwall for auger boring installation. Tieback design had to account for the obstructions of the deep foundations of the adjacent parking garage structure. Revit 3D modeling was used to determine appropriate tieback locations to avoid these.

The tunnel slopes down northward at approximately 7 percent grade. The modified horseshoe-shaped tunnel is approximately 30 feet high and 30 feet wide, with less than 5 feet of cover to an unreinforced masonry structure, a City of Seattle Historic Landmark constructed in the early 1920s. Building monitoring was performed continuously using an automated total station (AMTS), supplemented with manual monitoring of convergence points inside the tunnel. 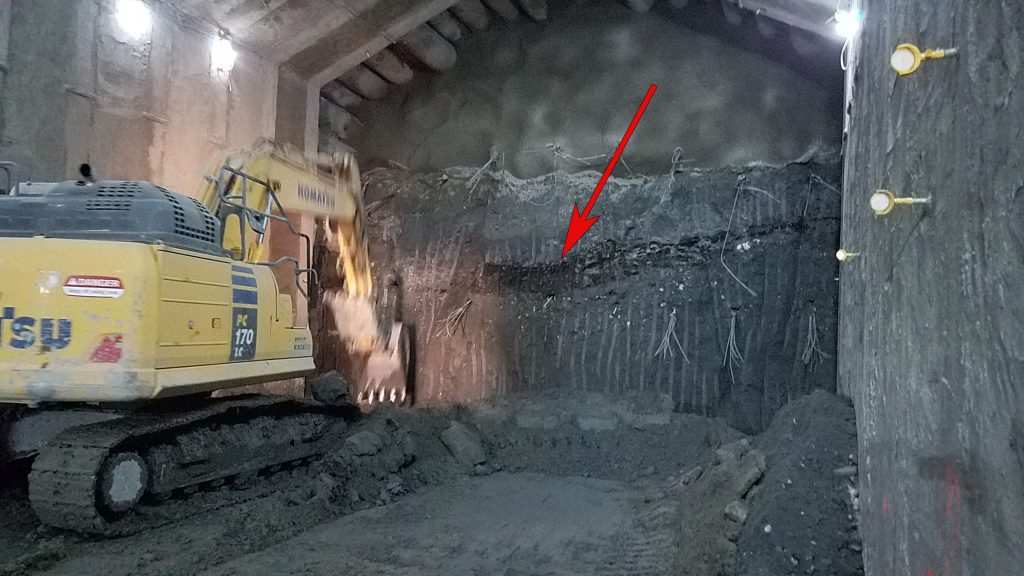 Excavation of the bench (note the dark peat layer)

Excavation support for the tunnel includes thirty 24-inch-diameter (610 mm), 180-foot-long pipe canopy tubes set around the tunnel perimeter; 14-inch-deep (355 mm) steel sets; sequential excavation (SEM) including 4-foot-long (1.2 m) rounds of a top heading and bench configuration; and conventional and steel fiber reinforced shotcrete to encapsulate the steel sets. Soil conditions along the tunnel alignment consisted of less than 15 feet (4.6 m) of fill over very dense glacially overridden granular soils, with interbedded layers of overconsolidated fine-grained soils. At the southern end of the tunnel, where there was less than 5 feet of cover, permeation grouting was performed prior to auger boring. Auger boring began in January 2020, but proceeded slowly because of the presence of cobbles and boulders. Static groundwater was approximately 20 feet (6 m) below ground surface. A system of eductor wells and wellpoints was installed to lower the groundwater below the tunnel invert.

Main tunnel excavation began in September 2020. SEM excavation proceeded without too many surprises, except for an approximately 12-inch-thick (305 mm) layer of hard peat. This layer was more difficult to excavate than the surrounding sand.

Tunnel excavation was completed in November 2020, and the arena is expected to open in October 2021. For further information, see a video of tunnel construction highlights.