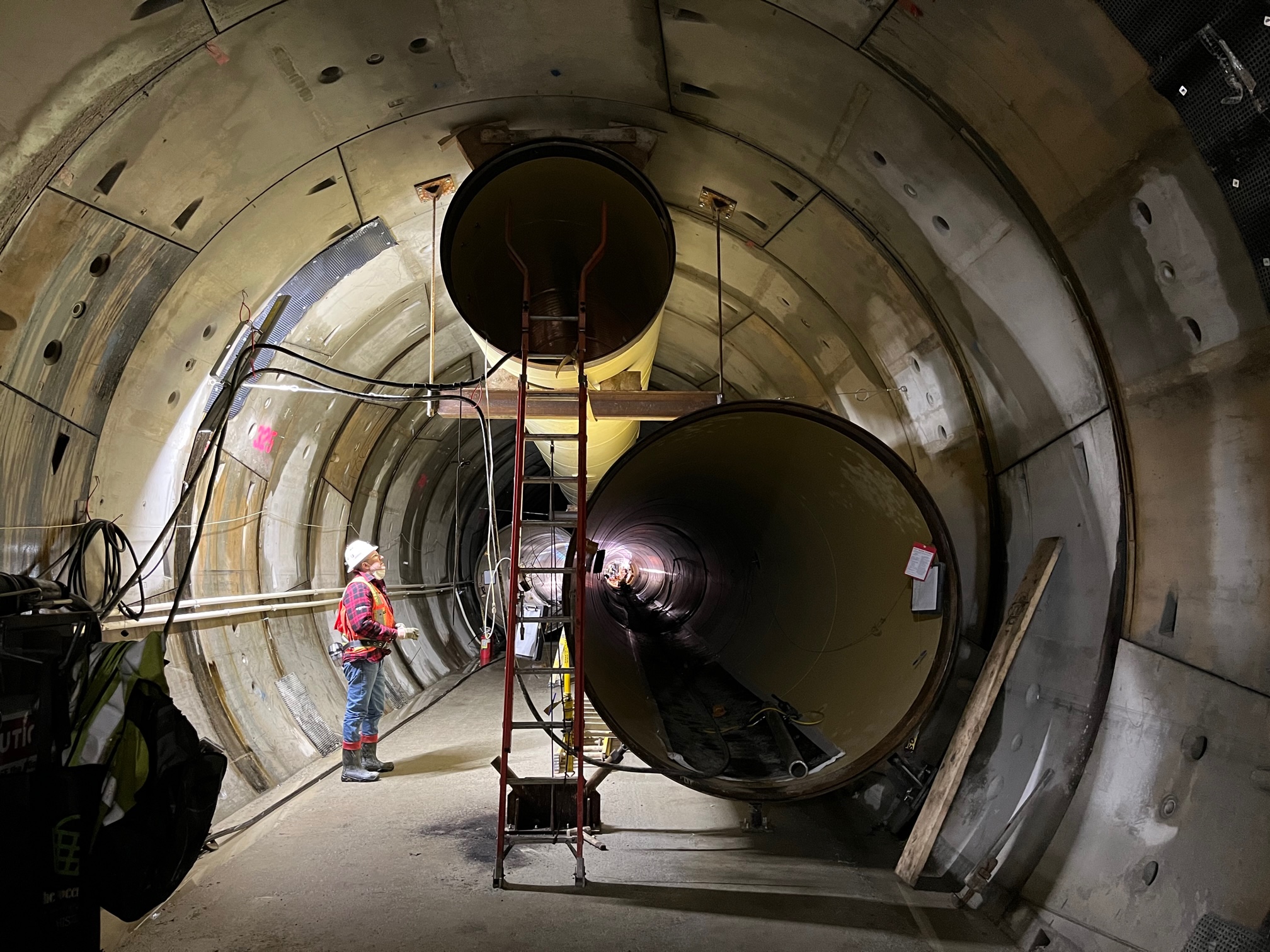 The Second Narrows Water Supply Tunnel project is now in its fourth year of construction with substantial completion expected by late 2023. The project replaces three of Metro Vancouver’s existing water mains between North Vancouver and Burnaby (“the Second Narrows Crossing”). These mains convey drinking water from the North Vancouver water sheds, across the Burrard Inlet, and into the City of Burnaby, where it is distributed to Metro Vancouver’s municipalities throughout the Lower Mainland. Following substantial completion, Metro Vancouver construction crews will construct the tie-in pipe between the existing mains and the new buried pipes exiting the valve chambers. The tie-in work will be done during low demand seasons, over a period of 2 to 3 years.

McMillen Jacobs is engineer of record for all underground structures and prime consultant for the design team along with our two main subconsultants WSP-Golder (geotechnical engineering) and AECOM (surface works, mechanical and electrical engineering). During construction, we have been providing on-site engineering and inspection services.

Support of excavation and tunneling for the underground water mains is now complete, and the project is transitioning into the permanent works phase. Recent project milestones include:

Pre-excavation grouting was implemented through boreholes drilled horizontally from the South Shaft to reduce hydraulic conductivity and stabilize the excavation in advance of the TBM’s arrival. Prior to breakthrough, the Shaft was also flooded with approximately 45 cubic meters (1,590 ft3) of water to permit the TBM to maintain active support pressure on the excavation.

Following TBM breakthrough, the cutterhead, forward shield, mid shield, and erector were removed via the South Shaft; the gantries were removed from the North Shaft via the tunnel; and the tail shield was abandoned in place. 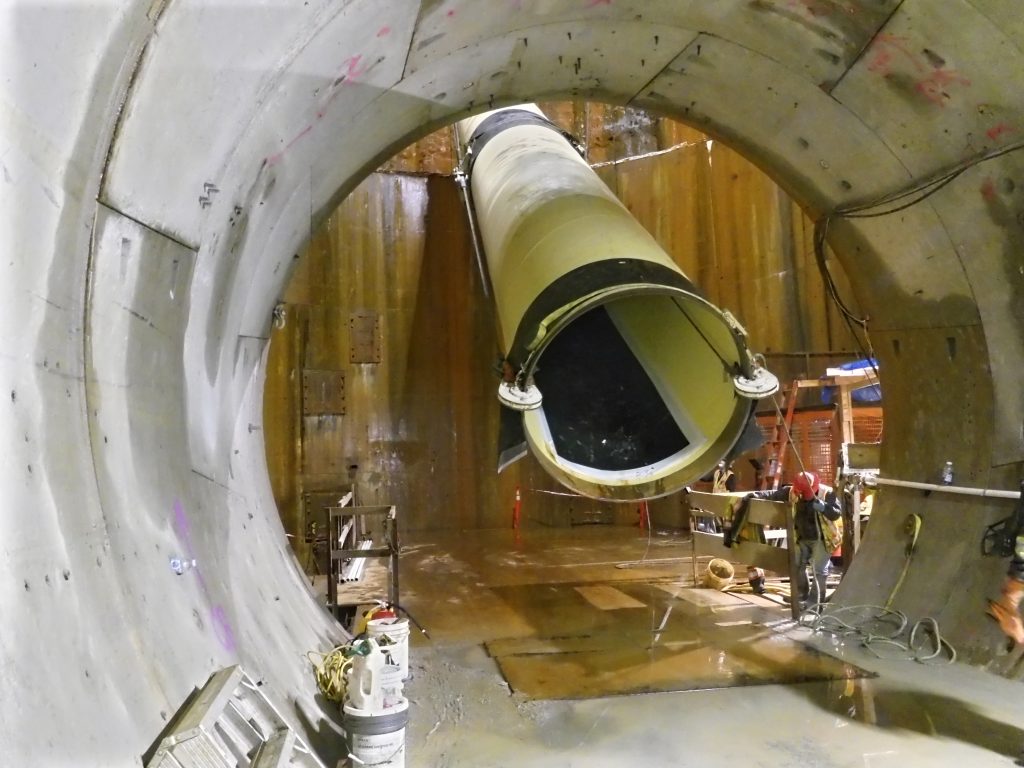 1.5-meter-diameter pipe lowered down the shaft at an angle (rather than horizontally) because the pipe length exceeds the shaft diameter.

Tunnel Pipe Installation:
The final lining of the tunnel will include one 1.5-meter-diameter (5 ft) and two 2.4-meter-diameter (8 ft) fully lined steel pipes, with coating on the extrados except for holdback areas at the joints, and cellular backfill in the annulus between the segmental lining and the pipes. The tunnel pipes were installed in 15.2-meter (50 ft) lengths. Each length was lowered down the North Shaft at an angle, placed onto pipe carriers staged in the shaft invert and partially in the tunnel, and transported down the tunnel to the leading joint of the previously installed pipe. Once the pipes were fit-up and surveyed into place, the joints were welded from the inside. Tunnel pipe installation commenced in January 2022 and was complete by the end of May 2022.

North Valve Chamber Shoring:
To facilitate construction of the North Valve Chamber, which is partially below grade, a contractor-designed steel sheet pile shoring system is being installed to support the excavation. Because of the abundance of large-diameter cobbles, the ground was first “replaced” with coarse sand to facilitate sheet pile installation. Once all sheet piles have been installed, the footprint will be excavated in the wet and a tremie slab will be poured, encapsulating a grid of predrilled hold-down anchor piles. Shoring work is currently underway and expected to be complete by September 2022.

South Valve Chamber Construction:
The electrical vault and slab and perimeter walls of the South Valve Chamber have been constructed.
Design work is ongoing to replace the Montrose main within the work site. This main supplies drinking water to the City of Vancouver, and its replacement will further ensure reliable drinking water by reducing risk to the main due to tie-in construction of the new Second Narrows mains.

Significant progress has been made on a landscape restoration plan, which includes grading, planting, irrigation, and new interpretive elements in Second Narrows Park. Early work for construction and planting of a Sierra retaining wall is ongoing.