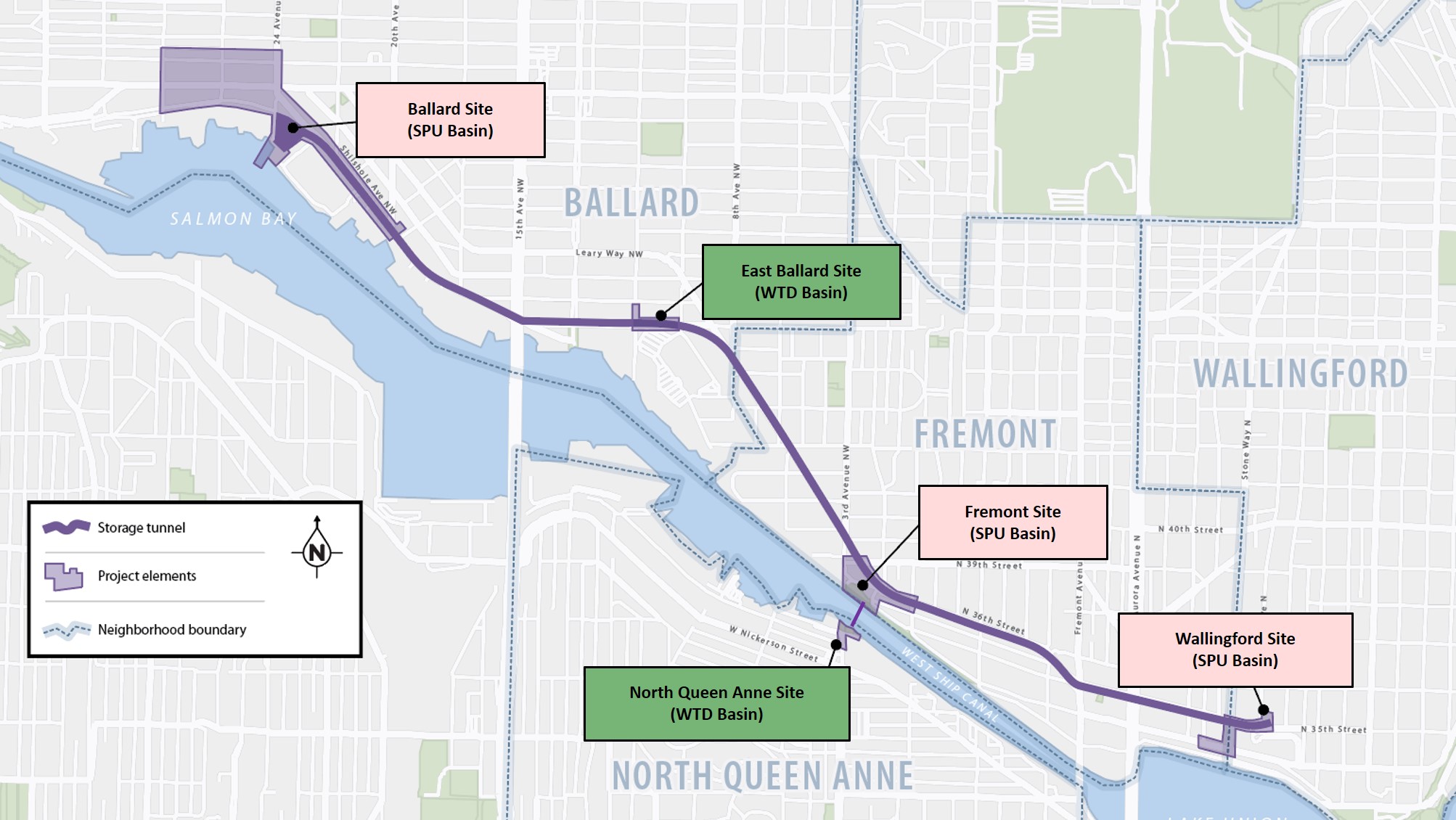 January 2019 was a milestone month on Seattle Public Utilities’ (SPU) Ship Canal Water Quality Project (SCWQP), as the 100% Tunnel Storage contract design submittal was delivered to SPU after three years of hard work. McMillen Jacobs is the prime consultant for this complex public infrastructure project, leading a team of over 25 subconsultants, which includes the client SPU, Brown & Caldwell, HDR, and Shannon & Wilson.

SCWQP is being delivered in response to an EPA Consent Decree, and under a Joint Project Agreement between SPU and King County, with the goal of limiting combined sewer overflows (CSOs) in the Seattle neighborhoods of Ballard, Fremont, Queen Anne, and Wallingford to no more than one overflow per year on average for each of the seven affected outfalls. Achieving this goal will keep nearly 80 million gallons (MG) (302,830 m3) of polluted water out of Seattle waterways each year, as these affected outfalls currently average more than 130 overflows per year.

The SCWQP program is composed of multiple projects, the two largest being the Tunnel Storage and the Tunnel Effluent Pump Station (TEPS) projects. (TEPS is also being designed by the McMillen Jacobs team.) The Tunnel Storage project is the central feature of SCWQP and includes a 14,000-foot-long (4,267 m) storage tunnel with an internal diameter of 18.83 feet (5.74 m) and a storage capacity of 29.2 MG (110,534 m3). Combined sewage flows are intercepted and sent to the tunnel via a series of new diversion structures, which route them to one of five new drop structures. Connecting the drop structures to the new 80- to 110-foot-deep (24.4–33.5 m) tunnel requires five shafts with diameters ranging from 11 feet to 86 feet (3.4–26.2 m), and depths up to 110 feet; an approximately 650-foot-long (198 m), 94-inch-internal-diameter (2,390 mm) curved microtunnel beneath the Lake Washington Ship Canal; and two short conventionally mined adits, each having a finished internal diameter of 8 feet (2.4 m).

The tunnel will be excavated using a pressurized-face tunnel boring machine (TBM), which will be launched from the west end of the tunnel alignment and driven through glacially overconsolidated soils under groundwater pressures up to 3 bar. The shafts are all located in soft ground, and will be constructed using drilled shaft, secant pile, and slurry wall techniques. Upon completion of the tunnel and upstream facilities, the TEPS, a 12-MG/day (45,425 m3/day) pump station, will be constructed within the TBM launch shaft and will serve to pump the stored wastewater from the tunnel to King County’s West Point Wastewater Treatment Plant via existing infrastructure.

SPU plans to issue the Tunnel Storage package for bid in late First Quarter 2019, with contractor mobilization anticipated for late 2019. Final design for the TEPS contract is underway and anticipated to be complete by mid-2020.