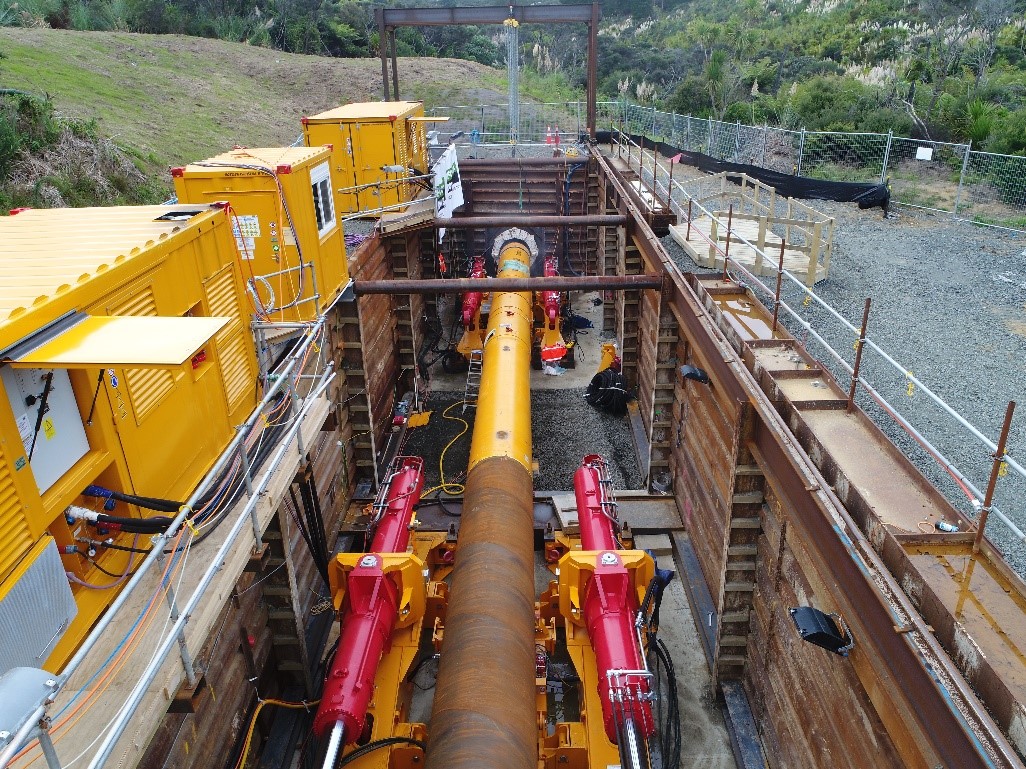 MTBM/pipe in Direct Pipe launch pit about to be launched

The first-ever Direct Pipe© installation in New Zealand has achieved another first. It broke the previous record for length by reaching 1,496.5 meters (4,910 ft). Then it broke its own record by achieving a final length of 1,950 meters (6,463 ft). It is now the longest pipeline drive ever installed by the Herrenknecht Direct Pipe system. The tunnel excavation was in local interbedded silt/sandstone with zones of very abrasive and hard turbidite deposits.

The drive reached its end point August 2, 2018, when the microtunnel boring machine (MTBM) cutterhead popped out of the seabed. A reception pit had been prepared on the seabed using marine dredging equipment. 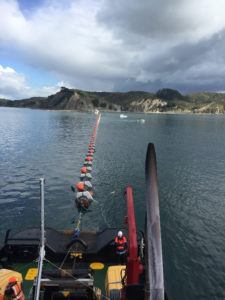 The Direct Pipe drive started at the Army Bay Wastewater Treatment Plant (WWTP) from a 30-meter-long (98 ft), 5-meter-deep (16 ft) thrust pit at an elevation of +22 meters (+72 ft) relative level and was completed at -12 meters (-39 ft) below sea level. The Direct Pipe System consisted of a 1.2-meter-diameter (4 ft), steel pipe bolted onto the MTBM in 100-meter-long (30 ft) sections as the tunnel advanced through one vertical and two horizontal curves. After the drive was completed, the pipe was flooded from external diver-accessed ports on the machine’s skin. This balanced the water pressure across the back of the MTBM and allowed it to be safely unbolted and removed.

That same day, the second section of the marine-laid outfall pipe, measuring 450 meters long (1,476 ft), was also successfully installed, using the float-and-sink method. This 800-millimeter-diameter (32 in.) high-density polyethylene (HDPE) pipe was welded into one length at a remote site next to the ocean. Permanent concrete ballast blocks were clamped to the pipe prior to launch. The pipe was then launched from the beach and towed 140 kilometers (87 mi) to the installation location. The assembly used the pipe’s air-filled buoyancy to allow the ballasted pipe to float during towing to the site.

Installation started with mooring the floating pipe string on station above the target alignment on the seabed. The string’s inshore end was then pulled underwater to create a low spot, and water was let into the pipe. The water’s added mass pulled the pipe string down to the seabed, forming an S-shape with the flooded section of the pipe on the seabed and the air-filled pipe on the surface. Release of air from the floating end of the pipe controlled the rate of sinking and back pressure inside the pipeline. The flooding progressed by the water inside the pipe moving along, continuing the installation. The pipe was sunk at about 3−4 meters per minute (10−13 ft/min) and was completed in approximately 3 hours.

These two installations are part of Army Bay’s WWTP upgrade and ocean outfall replacement. The project consists of a new outfall pipeline capable of conveying 1.4 cubic meters per second (49 ft3/s) from the WWTP to the marine discharge location. This important Watercare project will address population growth in the area and upgrade infrastructure to ensure network reliability.

The project also provides a high-level emergency overflow from the effluent storage ponds to the new outfall pipeline, upgrades the Discharge Pond Pump Station Pumps and Rising Main, and installs a new UV Disinfection Facility. It is being delivered to Watercare Services Limited as a design+construct (design-build) contract by McConnell Dowell constructors. McMillen Jacobs Associates has provided all detailed design services for McConnell Dowell. Commissioning is underway, with project handover at the end of April 2019.