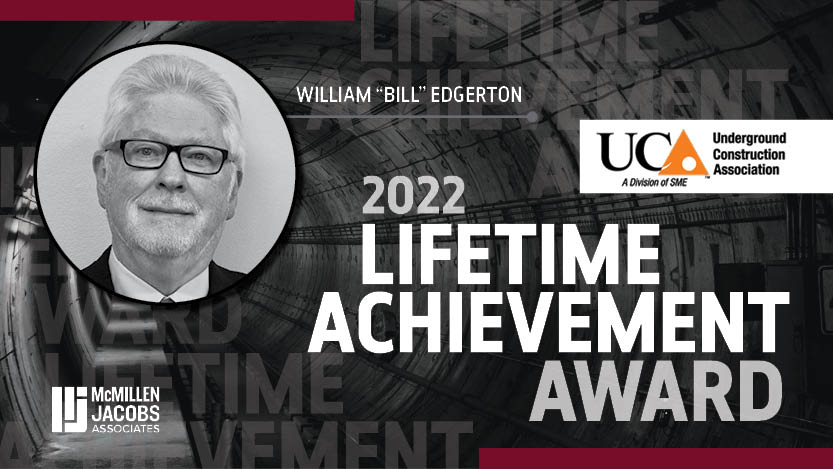 The Underground Construction Association (UCA) has honored William “Bill” Edgerton with the 2022 UCA Lifetime Achievement Award. Over the course of his 50-year career, Bill has made significant contributions throughout the underground construction industry and inspired a number of underground engineers with the philosophy that constructability should be considered throughout the design of all underground works. He has dedicated his career to improving productivity by developing contract documents that fairly allocate risk, and his communication skills and ability to engage people across multiple organizations comprising multiple disciplines has created a legacy of excellence within the industry. As president of Jacobs Associates (now McMillen Jacobs Associates) from 1999 to 2011, Bill guided the firm through a period of significant geographical expansion and growth. He  remains a Principal in the firm, and continues to mentor leaders both within the firm and throughout the underground design and construction industry.

Bill’s contributions to the underground industry run deep. During 2021 he served as President of the Society for Mining, Metallurgy and Exploration (SME), the first SME President to come from the UCA, a Division of SME. He serves as UCA’s lead member to the ITA Working Group 3 (Contractual Practices in Underground Construction) and since 2001 has also served as a Program Evaluator for civil and construction engineering programs on behalf of the Accreditation Board for Engineering and Technology (ABET). Bill formerly served on the Executive Committee of the UCA of SME and the board of directors for SME, acted as the Education and Training Committee Chairman for the UCA of SME, and is a member of the Moles and the National Academy of Construction.

He received his BS in Civil Engineering from Tufts University in 1970 and his MBA in Procurement and Contracting from George Washington University in 1979. In addition, Bill is a registered professional engineer in five states. Previous awards include the 2002 North American Tunneling Conference Outstanding Individual in the Underground Industry, the 2010 Outstanding Achievement Award from Tufts University’s Civil and Environmental Engineering Department, and the 2012 Golden Beaver Award for Engineering.

The 2022 UCA Lifetime Achievement Award will be presented on Monday, June 20, 2022, at the awards session held during the 2022 North American Tunneling Conference in Philadelphia, PA.