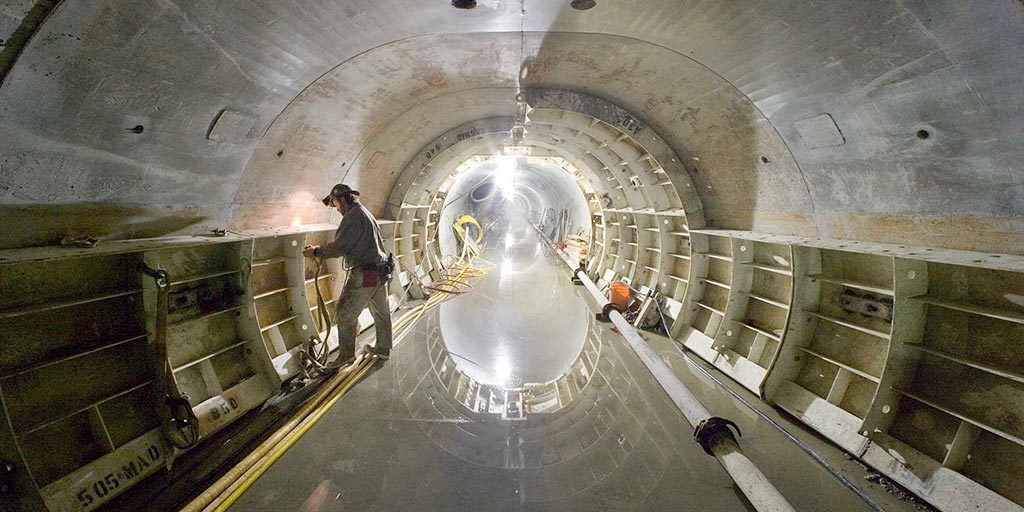 The Claremont Tunnel is an existing 18,000-foot-long, 9-foot diameter tunnel that carries treated water from the eastern Orinda Filtration Plant through the Berkeley Hills to three western distribution aqueducts located generally near Oakland, California, and other East Bay cities. The owner of the tunnel is the East Bay Municipal Utility District, and the water through the tunnel serves more than 70% of the district’s customers. The tunnel was constructed in 1929 and is lined with a combination of reinforced and unreinforced concrete. To mitigate expected seismic damage, a new 1,500-foot-long curved bypass tunnel was constructed adjacent to the main existing tunnel. The bypass tunnel includes a specialized vault section designed to deliver water even after significant seismic offset and an access tunnel through which district personnel could enter the Bypass tunnel to inspect and maintain it

The project bid for about $34 million. Construction work started in July 2004 and was to be completed by June 2006. During this period there was one planned 3-month winter outages, during which the existing tunnel would be rehabilitated and the new tunnel tied in. McMillen Jacobs Associates served as prime consultant, leading a team of tunneling experts that identified engineering alternatives and completed final design. During construction, the firm also provided construction management support, resident engineering, inspection services, and claims assistance.

Rehabilitation of the existing tunnel included comprehensive contact grouting of voids that had developed in the preceding 80+ years, to ensure the concrete lining was in full contact with the ground it was installed to support. Defects in the concrete were also identified and meticulously repaired to extend the life of the original tunnel.

Ground conditions encountered in the excavation of the new access and bypass tunnels included sheared and crushed serpentinite and clayey fault gouge. A 108-foot-long enlarged vault zone was constructed to span the Primary Hayward Fault Zone, and its location was confirmed by 24-hour geologic mapping during tunnel excavation. A special excavation and support sequence used concrete-backfilled side drifts as foundations for the vault steel sets. Concrete in the vault included shear fuses designed to distribute the anticipated offset and curve the tunnel like a spine. In addition, a 3-inch-thick, 85-foot-long steel pipe was installed as a redundancy measure to ensure that water will be delivered after a major seismic event.

During construction of the project, the contractor’s tunnel excavation progress began to fall behind the baseline schedule. To mitigate this delay, the contractor planned to use three shifts for mining the new tunnel commencing with the first winter outage, but could not immediately do so because of noise restriction requirements. After noise mitigation measures, the contractor was able to utilize three shifts, but the third shift was restricted to inside the tunnel. This was because muck could not be removed from the tunnel and materials and equipment could not be moved in and out of the tunnel because of the exterior night time noise restrictions. The project delays were not fully recovered despite mitigation by working three shifts, requiring a second winter outage be implemented the following year. The contractor claimed that the mitigation was not effective because using three shifts with the roadheader excavator was less productive than using the planned two shifts. The contractor based this finding on a measured mile analysis.

As a result of the delay to the project and other issues, the contractor filed claims totaling over $8 million. Other disputed issues included: a credit for deleted piling, deleted ground support, a value engineering proposal for cast-in-place concrete versus shotcrete, and a change in estimated quantities for contact grouting of the main tunnel. McMillen Jacobs provided claims assistance to the district and at dispute resolution board (DRB) hearings analyzing various entitlement, delays, productivity, and damages. Part of the analysis included reviewing mining production data from different two- and three-shift production periods.

McMillen Jacobs’ proper measured mile analysis of these data determined that there was minimal loss of productivity and that the greater production associated with the third shift caused the amount of overall delay mitigated by the third shift to be greater than that claimed by the contractor. At a DRB hearing, McMillen Jacobs presented findings regarding the benefit of the third production shift. The parties eventually settled the dispute in August 2007 through mediation.