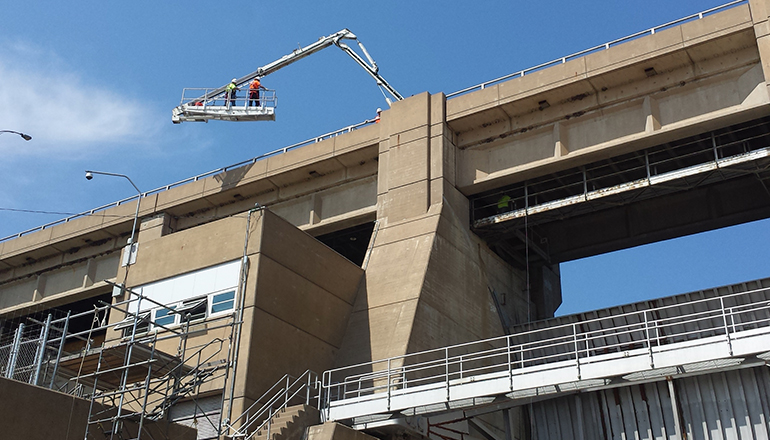 McMillen Jacobs Associates (McMillen Jacobs) was awarded a MATOC to provide design-build and construction only task orders within the Omaha District.

McMillen Jacobs was contracted to remove sections of 18-inch-thick concrete slab at locations that an existing 12-inch VCP was located. The McMillen Jacobs team excavated to 7-9 feet deep to get to the VCP, cut at the line at the joints, and replaced it with a new 12-inch HDPE pipe. About 3,000 square feet of concrete was removed during the course of the project. The scope, while straight forward, was complicated by oncoming adverse weather and the project location. The work was located on an existing spillway approximately 25-feet below ground level at the river level. A crane was required to lower all equipment, tools, and materials into the spillway. The spillway was on a slope requiring unique technical skills to excavate and remove material at the required depths and replace the pipe.

The project was completed a month ahead of schedule and before multiple snow fronts passed over the job. Additionally, due to a value-engineering effort, McMillen Jacobs was able to save the Corps $40,000. The client was very satisfied with the final product commenting that the onsite USACE personnel enjoyed working with McMillen Jacobs.

This was a very successful project and McMillen Jacobs delivered quality work as well as extra work with no cost to the government. McMillen Jacobs, at their own expense, completed 38 feet of random concrete spall patch work that had been left from the previous contractor. They also worked through the value engineering submittal to save the Corps money on the entire contract value. All this was done in a timely manner and reporting was timely, accurate, and provided good photos as the project progressed. Any deficient work was corrected immediately without question. These items were taken care of as the work progressed. The management was also easy to work with and very cooperative. There were no accidents on site during the contract and safety was a top priority with this company. The contractor conducted safety meetings as required and provided safety PPE though out the project. Very few minor safety deficiencies were noted during the construction work.
– Dennis Swenby, Construction Inspection Technician, USACE

Emergency and Permanent Repairs to Garrison Dam Bridge Pier; North Dakota. In February, a large crack was discovered beneath one of the girder bearings on the Garrison Dam Spillway Bridge pier 32. McMillen Jacobs was hired under a design-build contract to perform an emergency inspection and repair.

Within two weeks of the discovery, McMillen Jacobs performed a site visit, oversaw a ground penetrating radar (GPR) inspection, and executed emergency repairs to shore up the bridge.

McMillen Jacobs fabricated and installed an external reinforcing repair to provide a clamping force on the spalled section of concrete. The repair provides confinement to the damaged concrete section which will prevent it from further separating from the pedestal, and will provide addition shear friction across the cracked joint.

In addition to the temporary repairs, McMillen Jacobs was awarded a contract to complete the permanent repairs. To-date, 30 of the 60 piers are completed (as of Aug 2015). Our team lifted the bridge deck by installing “jacking brackets” on the east face of each pier directly beneath the bridge girders on the expansion bearing ends. Our team proposed a unique approach to the replacement of the expansion bearing devices, which minimized the impact to the existing structure, minimized the height the bridge needs to be lifted, and provided a cost effective approach to the work. Following the lifting of the bridge girders to separate the upper and lower bearing plates from one another, we core-drilled a series of holes under the lower bearing assembly which allowed the lower bearing plate to be removed from the concrete pier. We then positioned the new elastomeric bearing plate into position. The new bearing plate consisted of two thin steel plates sandwiching an elastomeric pad, with embedded steel shim and was grouted to the existing concrete pier to serve as the new expansion bearing surface to the bridge girder.

McMillen Jacobs also performed concrete repair for both superficial and full depth spalls and delaminations and seal for all concrete cracks. Surface preparation began with power washing it under high pressure. Then it was mechanically roughened to provide a bonding surface for the new cementitious patch material. On full-depth concrete spalls, after power washing, the exposed rebar was inspected to determine the condition of the exposed bar. Exposed rebar was cleaned with a wire brush or other suitable method. Rebar that was significantly damaged or reduced in diameter due to rust removal was evaluated and addressed on a case-by-case basis to determine the need for replacement.

In order to perform the concrete repairs to the spillway bridge, our crews were lowered via a bridge inspection truck to the underside of the bridge in order to install temporary scaffolding and walkways which the work area could be accessed from. Other unique challenges included utilizing an adjustable spreader beam to lift heavy loads to the underside of the bridge from the top of the road due to limited access provided by an existing stairway and catwalk.