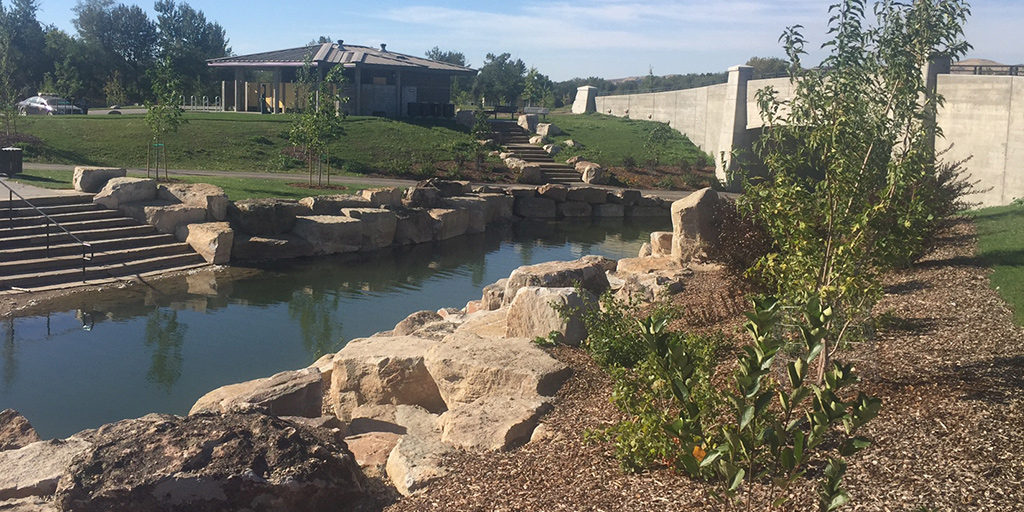 Esther Simplot Park: The new Esther Simplot Park will be created at an undeveloped 55-acre area encompassing 17 acres of ponds and 8.9 acres of riparian natural areas in Boise, Idaho. This park is being developed in conjunction with the second phase of the Boise River Park (described below). The goal is to create expanded ponds and a connecting channel. Natural and paved pathways will weave through grassy areas and across bridges. Recreational features will include pond beach access for fishing and boats, natural playground features (logs, boulders, etc.), picnic shelters, an ADA accessible pathway around Pond 1, improved trail surfacing around Pond 2, and relocation of the Boise River Greenbelt to provide improved access to the site.

In 2012, Phase I of the River Park was dedicated and included two adjustable Wave Shapers which have been enjoyed by surfers and kayakers. Phase II is located on a 0.3 mile stretch of the Boise River between the Main Street Bridge and the Veteran’s Memorial Bridge and intended to be a seamless extension of Phase I. The project will include the construction of in-river drops, chutes, natural slaloms, jetties, and instream boulders to maximize the recreational experience on this stretch of the river and will work in concert with the existing Phase I River Park facilities and the adjacent Esther Simplot Park.

This development will replace the existing diversion structure managed by the Farmer’s Union Ditch Company (FUDC) and Boise Valley Ditch Company (BVDC) with a recreation friendly facility that will improve flood conveyance capability of the river and FUDC/BVDC water delivery. This will provide safer and improved park access, and meet the “no net rise” criteria for flood conveyance and other permitting requirements. The new diversion includes an improved intake/trashrack, 326-foot long concrete culvert, and flow control gates at the downstream end of the culvert. The ground surface in the vicinity of the diversion will be lowered approximately 3 feet to provide additional flood conveyance through this area. Our team constructed the cofferdam to divert the Boise River around the project site. The downstream side of the cofferdam was dewatered and excavated and we ran a water pump to move water from the river to the canal below the gates to maintain fish populations in the canal below the project site. Our crews also installed a culvert consisting of 30’ wide x10’ high x 326’ long precast segments and approximately 2000 yards of concrete which was poured in cold weather. The intake is 60’ wide and the outlet has 5 steel hand-operated gates. Upon completion, the cofferdam was removed and the river was returned to its original state. Challenges to the project included the tight schedule that limited our access to the site until after the irrigation season came to an end in October, cold and unpredictable weather, and habitat and sensitive environmental requirements.

McMillen Jacobs is providing design and construction services for the Esther Simplot Park, Phase II of the Boise River Park, and the diversion structure. Because these projects are interdependent, this description will describe them as one project. Scope of work includes the evaluation, design, and construction of Low Impact Development (LID) features which provide an ecosystem-based approach that allows the development to function as part of the natural environment as opposed to apart from it. LID techniques were incorporated into the design to collect and treat stormwater from all impervious surfaces within the park and treat stormwater runoff from surrounding neighborhoods.

The project also includes the following elements of work:

McMillen Jacobs’ designs promote fish and wildlife habitat both in-stream and in the riparian zone. Improvements for habitat that are designed into this development include:

Because of Boise’s arid climate and high summer temperatures, many of Boise’s recreational opportunities revolve around the City’s rivers and ponds. McMillen Jacobs’ design will enhance these opportunities by providing:

An important feature of McMillen Jacobs’ role is the coordination with all project stakeholders including the FUDC and BVDC Boards, Boise City Mayor and Council, Garden City Mayor and Council, the Friends of the Park, the Boise Parks Board, the Simplot Foundation, the Boise City Parks and Recreation Department, Boise City Public Works Department, Boise City Planning and Development Services, Idaho Department of Water Resources, the Idaho Department of State Lands, the existing fishery, and various groups in the community including fishing groups, stand-up paddlers and kayakers, river tubers/floaters, local swimming and triathlon clubs, green belt users (walkers, runners), boaters with disabilities, and local residents and businesses.

In order to meet the permitting requirements, McMillen Jacobs was involved in improving and updating the FUDC/BVDC water delivery—while meeting the “no net rise” requirement mandated by the Federal Emergency Management Agency (FEMA). A key element of the project has been coordination of the conceptual design for the River Park with the design of the Esther Simplot Park—especially as it relates to river improvements and demonstration of compliance with FEMA’s “no net rise” requirements.