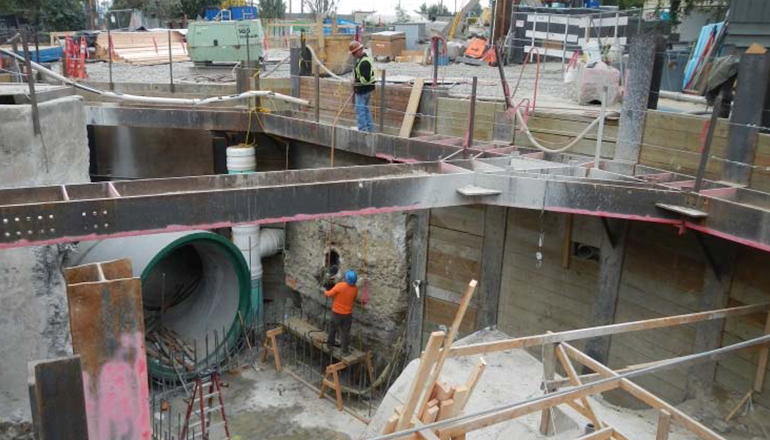 The $22 million Fremont Siphon project replaced a vital, 100-year-old link in Seattle’s sewer service infrastructure. Sewage and stormwater from more than 100 square miles pass through the Fremont Siphon every year to be cleaned and safely discharged at King County’s West Point Treatment Plant. During storms, the pipe carried up to 220 million gallons per day, making it one of the most heavily used pipes in the county’s regional sewer system. McMillen Jacobs provided design for the shafts to be excavated for installation of the vertical legs of the new siphon, which were then connected beneath the ship canal through an MTBM bore to create the new siphon.

As with most underground projects, the Fremont Siphon project posed significant challenges and risks. Service interruption could not occur. Cutover to the new system and decommissioning of the old system was a critical phase in the project. Project constraints for access to project areas were in place because of the limitations of the adjacent landowner’s existing program requirements. To ensure timely completion, the contract included milestone dates. Project delays threatened the timing of when bypass and subsequent final cutover could take place because of increased seasonal flows caused by Seattle’s wet climate.

In addition to providing engineering expertise to King County to address these and other challenges, McMillen Jacobs provided CPM schedule and consulting services under separate contract to assist the project team in analyzing schedule concerns. Study of the project documentation and submittals showed that enhancements to the project schedule were needed. McMillen Jacobs’ schedule experts developed improvements to the CPM where important details were missing, and provided the information in a format that readily communicated findings to the project team. We enabled the project controls team to identify early warning signs during project execution by blending our claims avoidance experience with project management fundamentals. Performance issues that could threaten project success were identified, communicated, and managed. This is another example of how McMillen Jacobs can call upon its array of resources to provide needed expertise: superior engineering and design coupled with consulting and CPM schedule analysis.