LOCATION:  Hawaii   |   OWNER:  City and County of Honolulu Department of Environmental Services and Department of Design and Construction 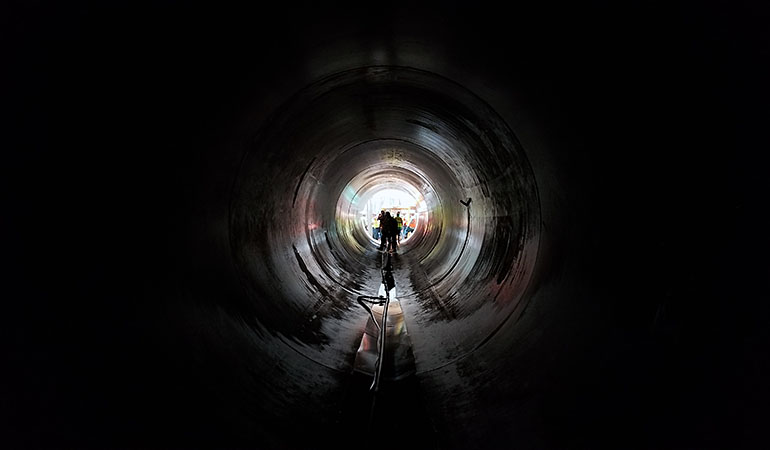 The Kaneohe-Kailua Sewer Tunnel project consists of a 10-foot inside-diameter (3 m), 3-mile-long (4.8 km) tunnel that conveys wastewater between the existing Kaneohe Wastewater Pretreatment Facility (KWPTF) and the Kailua Regional Wastewater Treatment Plant (KRWWTP) on the windward side of Oahu. During operation, the tunnel provides over 9 million gallons (34 million L) of storage capacity and significantly reduces the risk of wastewater spills during wet weather events.

As part of the Wilson Okamoto Corporation–led design team, McMillen Jacobs Associates provided preliminary and final design for the tunnel and shafts and was responsible for overseeing the project geotechnical investigations. The firm also provided construction cost estimating and scheduling support, and on-site engineering support during construction.

The tunnel alignment extends beneath the Oneawa Hills, which are the remnants of a former caldera and shield volcano (Ko’olau Volcano) that helped form the island nearly 3 million years ago. Geologic conditions along the tunnel consist of basalt lava flows, breccias, and numerous dikes, all of which have undergone varying degrees of hydrothermal alteration because of their formation within the former volcano. Most of the tunnel was constructed in rock below groundwater level. At its deepest point the tunnel is over 600 feet (183 m) below the ground surface. At both ends of the tunnel, residual soils and weak lagoonal and alluvium deposits were encountered, which required jet grouting and conventional methods to excavate the tunnel. Once rock was encountered, the tunnel was excavated by a 13-foot-diameter (4 m) Robbins main-beam TBM (nicknamed Pohakulani, which means “Rock Girl” in Hawaiian). After excavation, the tunnel was lined with a 10-foot inside-diameter Hobas fiberglass pipe and grouted into place. A 270-foot-deep (82 m) intermediate access shaft was also constructed to allow future maintenance and operations within the tunnel. The access shaft, constructed using reverse circulation drilling (RCD) methods, was lined with an 8-foot-diameter (2.4 m) Hobas riser pipe.

The Kaneohe-Kailua Sewer Tunnel project was constructed from 2014 to 2018. Construction cost was approximately $194 million. Tunneling work was completed in June 2016, and the tunnel was put into service in May 2018. In February 2019, the American Council of Engineering Companies of Hawai`i (ACECH) recognized the project with its annual Engineering Excellence Grand Conceptor Award.