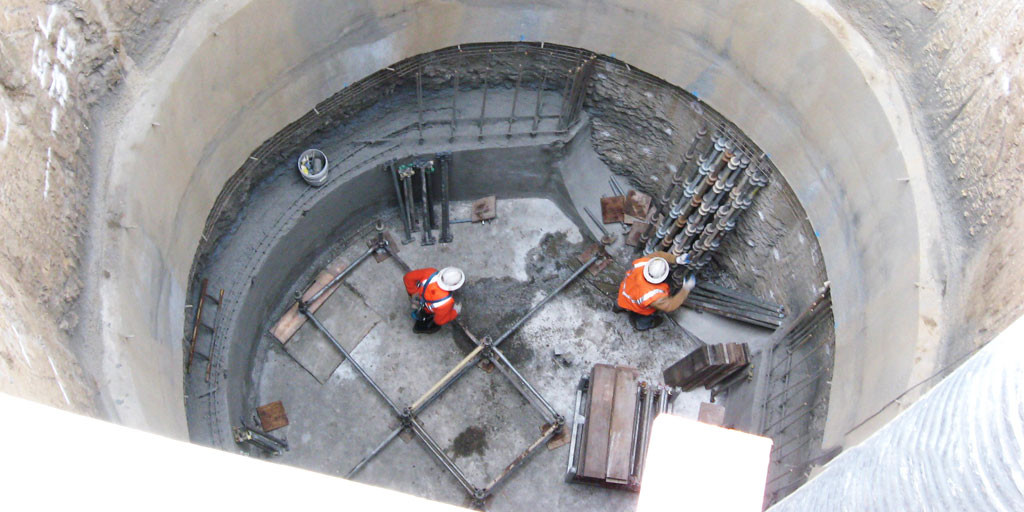 Construction occurred under difficult ground conditions consisting of relatively thin surficial deposits of peats, organic soils, fills overlying deep deposits of alluvial soils, high groundwater conditions, and two confined aquifers — one of which was located at the tunnel eye. The shallow groundwater level could not be lowered more than two feet below the lowest daily fluctuation because dewatering-induced settlement could cause damage to Old River levees. Watertight shafts were required, but existing construction techniques (secant piles and slurry walls) were not feasible because of shaft depth and possible pile drift during installation. Caissons constructed in the wet were considered the most feasible construction method for the shafts. The contractor, Ranger Pipelines, and its shaft subcontractor, Malcolm Drilling, proposed the cutter-soil-mixing (CSM) method for shaft construction.

This was the second known application of CSM technology in the United States for construction of a microtunnel shaft, and the first known use of applying shotcrete for secondary wall reinforcement. Because of the CSM method’s unknown nature, McMillen Jacobs Associates provided full-time construction monitoring during shaft construction, excavation, and shotcreting.

Both shafts far exceed the “watertight” criterion of 10 gallons per minute. The microtunnel machine excavated through the shotcrete and CSM wall in June 2009.

The Middle River Intake and Pump Station project was recognized as the 2009 “Project of the Year” by the Northern California Chapter of the Construction Management Association of America.