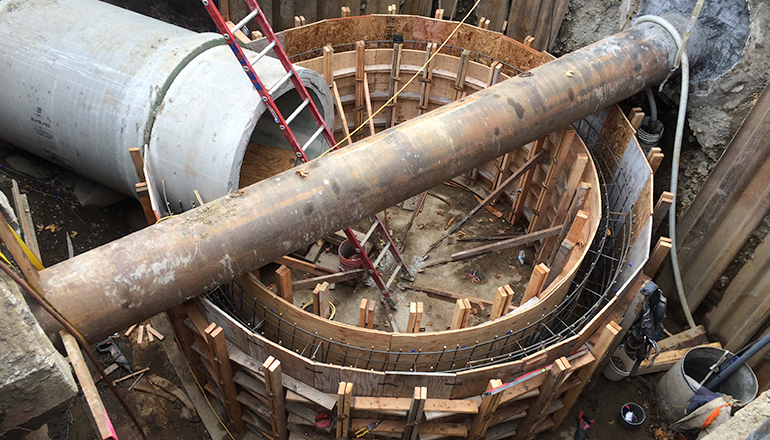 The $26 million Murray CSO project in Seattle, Washington, required the construction of a one million gallon underground combined sewage storage tank and connection of the tank to the existing Murray Avenue pump station and influent sewers. The work included the construction of a 96-foot-diameter, cast-in-place storage tank structure approximately 67 feet in depth. The contract work also included an odor control facility, mechanical and electrical controls, and installation of a standby electrical power generator.

The owner, King County, retained McMillen Jacobs to analyze three separate claims submitted by the general contractor. One of the more complex claims alleged that a differing site condition was encountered regarding the condition of the existing 48-inch sewer pipe. The claim asserted that the contractor was prevented from being able to support and protect the live pipe in place during the Manhole No. 1 installation as it had originally planned, and that this would have allowed the contractor to avoid constructing a temporary bypass during the project. According to the claim, several impacts resulted, such as delay and resequenced work, and extra work to construct a full bypass to remove the existing pipe to be replaced by a manhole. Other direct impacts that were claimed resulted from a change in the shoring method for the manhole, and a change in the installation method for the manhole.

McMillen Jacobs’ analysis of the contract documents concluded that restrictions related to the installation of the new 60-inch sewer line and associated manholes and tie-ins were clearly identified in the documents and affect the contractor’s means and methods. It was found that the information in the contract (such as the details for the manhole, the existing conditions shown in the plans for the existing live 48-inch sewer, and the specifications requirements) reasonably suggests that the contractor’s assumed means and methods to support the existing sewer in place were problematic. In addition, the contractor’s plan for using the existing live sewer through the new manhole as a temporary bypass was found to not be accordance with the specifications, which required that a sewer bypass should be accomplished “by routing the contributing flow away from the Contractor’s work area.” The analysis concluded that a complete temporary bypass for the existing 48-inch line is prudent and reasonable and therefore was not a change to the contract.

McMillen Jacobs presented these findings at mediation, and all claims were settled.