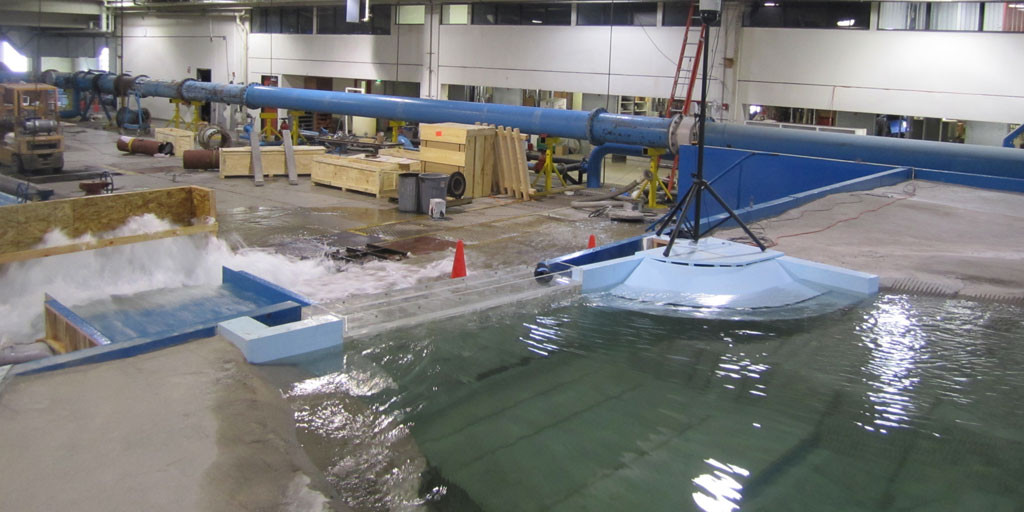 McMillen Jacobs Associates (McMillen Jacobs) was awarded the Architectural and Engineering Services Contract for Civil Works for hydraulic and hydrologic projects within the Sacramento District boundary for the United States Army Corps of Engineers. Example task orders are included below.

The Blue River has experienced degradation primarily as the result of dredge mining between 1900 and 1940. The mining operations required the dredging of the river alluvium to extract gold. The alluvium was sorted by size with the fines being washed downstream and the larger material, ranging from approximately 4 to 12 inches in diameter, placed in large piles within the river bed and floodplain. What remains today are large piles of unstable and highly mobile river cobble which supports little to no vegetation. During times of modest to low flow the river is transported downstream below the ground surface, through the voids of the dredge rock, creating a discontinuous river system incapable of sustaining fish and a riparian corridor. To remediate these problems the project identified habitat needs and opportunities, developed alternatives, and selected a recommended preferred plan for restoration of the Blue River. Additionally, the project enhances fish and wildlife habitat, expands wetlands, revegetates the river’s flood plain, improves water quality, conserves water, and provides environmental education and potentially some minor recreational opportunities.

GCID operates and maintains a pumping station along the Sacramento River that services 175,000 acres of prime agricultural land. A bypass channel routes water past a large fish screen, diverting up to 1,200 cfs into a canal, and directs the remainder back into the main stem. Just downstream of this facility, a natural channel avulsion occurred in the 1960s and reduced the upstream head, threatening both the GCID water right and fish passage in the area. In response, USACE, in collaboration with California Department of Fish and Game and GCID, designed and built a gradient facility to maintain both discharge rates and acceptable water depths for fish passage. For this study, McMillen Jacobs investigated the long-term functionality of the facility and assessing areas of scour and potential selective transport by conducting an extensive hydrographic survey near the facility. The project includes 3-diemnsional velocity measurements and evaluation of a previous RMA2 2D model based on this information. Work also included preliminary plans and analysis with a cost estimate to access what repairs may cost.

The work under this task order consists of hydraulic design services and related documentation in support of the American River Common Features General Reevaluation Report (GRR), specifically the planning phase which focuses on refinement and evaluation of alternative plans. This Scope of Work focuses on developing the Lower American River threshold analysis which will help determine the erosion alternatives for this project.

McMillen Jacobs was retained by the San Francisco District under the USACE Sacramento District Contract to complete the HEC-HMS and RAS models and dam break inundation study for a 320 foot high dam over a 43 mile long stream length. This included model development for the entire Russian River watershed using the HMS model and RAS modeling from the dam to the ocean. The RAS modeling was conducted under the newly developed MMC guidelines for providing scenarios, breach modeling, and output mapping and data reporting.

McMillen Jacobs managed a fast track project for the Sacramento District that included both physical and computational fluid dynamics (CFD) modeling. This modeling effort was in support of the Folsom Joint Federal Project at Folsom Dam, which includes a new auxiliary spillway. Folsom Dam is on the American River about 20 miles northeast of Sacramento, California. The dam was designed and built by the USACE and transferred to the Bureau of Reclamation for operation and maintenance in 1956. The dam is a concrete gravity structure 340 ft high and impounds a reservoir of approximately one million acre-ft. Design changes to the spillway auxiliary approach channel were made to the project after the initial physical modeling effort was completed and after the initial prototype construction was initiated. These design changes required a new modeling program to ensure that vortices would not form with the new approach conditions. This new modeling effort required a very fast track schedule since the construction of the project had already been initiated. The critical portion of the physical modeling was completed in a four month time period to accommodate the USACE’s schedule, and the numerical modeling effort was completed in less than three months. The physical model was a 1:30 model of the auxiliary spillway control structure, spillway approach, and a portion of the reservoir. The physical model included approximately 2500 feet of the upstream reservoir approach; the gate structure consisting of gate intake, piers, gates, trunions, and discharge conduits; and a short section of exit channel. This resulted in a physical model reservoir that was approximately 84 ft x 56 ft. The highest model test flow was 63.4 cfs, which was the model equivalent of a prototype flow of 312,500 cfs. To meet the schedule, McMillen Jacobs worked with Utah State University (USU) to construct and test the physical model. McMillen Jacobs staff built the complex spillway control structure, and USU built the model basin and reservoir. The modeling team then combined the two structures to save a significant amount of time in model construction. While the physical model was under construction, McMillen Jacobs also developed and tested a CFD numerical model of the reservoir to develop the boundary conditions for the physical model. The CFD model of the Folsom Lake reservoir included the approach channel and approximately 3,000 feet of reservoir upstream of the proposed channel.